Federal Liberals up in Ontario, Conservatives still at majority

Yesterday, The Globe and Mail reported on a new poll from Nanos Research on federal voting intentions in Canada. The results are, for the most part, unremarkable. But a shift in Ontario does change things up a little. 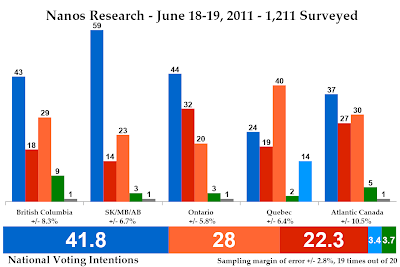 The Conservatives still hold the lead with 41.8% of the vote, almost 14 points ahead of the New Democrats. That's an increase of 2.1 points for the Tories since Nanos's last poll at the end of May.

None of these national shifts are statistically significant.

There have not been any major shifts at the regional level either, except in Ontario. There, the Conservatives are holding firm with 44.2% of the vote, but the Liberals are up 5.5 points to 31.8%. The New Democrats are falling back, and now have the support of 20.4% of Ontarians, down 3.9 points since the end of May.

That generally brings us back to where the parties stood before the election in this province. It would certainly mean fewer seats for the NDP, but with the Liberals more competitive in the province the Conservatives could not count on the kind of sweep they had on May 2nd.

Elsewhere, the New Democrats lead in Quebec with 40%, followed by the Conservatives at 24.3% and the Liberals at 19.1%. That differs greatly from the low levels of support CROP and Léger have found for the Liberals in Quebec. The Bloc is out of the running in this poll, with only 13.8% support.

The Conservatives also lead in Atlantic Canada with 36.9%, and the Prairies (Alberta, Saskatchewan, and Manitoba) with 59%. The NDP is running second in both regions with 30.4% and 23.3%, respectively. The Liberals, with 26.6% in Atlantic Canada, are still a factor out East. 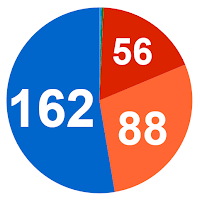 The New Democrats form the Official Opposition with 88 seats, a drop of 15 from their current standing. The Liberals win 56 seats, up 22, while the Bloc Québécois is reduced to one seat and the Greens retain their toehold in British Columbia.

Breaking it down regionally, the Conservatives win 22 seats in British Columbia, 27 seats in Alberta, 21 in the Prairies, 57 in Ontario, 18 in Quebec, and 15 in Atlantic Canada.

The New Democrats win nine seats in British Columbia, one in Alberta, five in the Prairies, 17 in Ontario, 47 in Quebec, and eight in Atlantic Canada.

The Liberals win four seats in British Columbia, two in the Prairies, 32 in Ontario, nine in Quebec, and nine in Atlantic Canada.

Note that I am still working on the new federal projection model. This projection is a mix of what I have already finished for 2015 and what I was using for the 2011 election.

Nanos also looked at the leaders' ratings on trust, competence, and their vision for Canada. Combining these gives the "Leadership Index Score". Stephen Harper tops the list with 104.5 points, down 1.4 from late May. Jack Layton is next with 81.9 points, down 15.5 points, while Bob Rae clocks in at 27.3 points in his debut.

Layton's fall might seem significant, but on the three scores he averages a drop of 5.2 points. That isn't a huge variation considering the poll's margin of error, but it does appear that some of the shine might be wearing off. The NDP leader's position on the Canada Post strike/lockout, when the vast majority of Canadians just want their mail, will likely not brighten his numbers.
Posted by Éric at 1:43:00 PM