Tories are happy, others not so much

Last week, Environics released the results of their post-election survey. The findings are very interesting, and I encourage you to check them out. The poll itself has to be considered quite accurate, as when they asked respondents how they voted the result was almost identical to the election night's results. They were even close on the turnout, which is a rarity indeed. However, they still under-estimate the Conservatives by two points, indicating that there has to be some sort of "shy Tory" factor at play. It is puzzling.

But two results of the poll especially grabbed my attention.

Firstly, Environics asked respondents the main reasons why they voted for the party that they did. By choosing the top three responses by party, we get an indication of the motivations behind the average Conservative, New Democratic, and Liberal voter.

The top response for the New Democrats was also that voters liked the party, but this was the main reason for only 34% of voters. A desire for change was second, at 28%, while 13% voted NDP to "stop" the Conservatives.

One-third of Liberal voters cast their ballot that way because they wanted to stop the Conservatives, a less-than positive reason for voting. Another 27% liked the party, while 20% liked the local candidate - the highest proportion of any of the parties.

The other question that interested me was how voters felt about the outcome. They could choose between feeling happy, relieved, sad, fearful, and indifferent.

If we consider feeling happy and relieved to be positive emotions, and feeling sad and fearful to be negative emotions, we can see how voters for each party felt about the election in general. 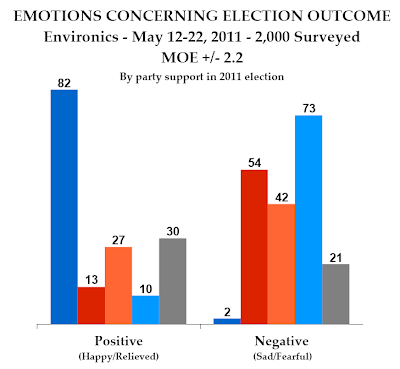 In the above chart, the gray represents those who did not vote.

At a glance, we can see that Conservative supporters felt very positively about the election result - and why not. Their party won a majority. Fully 82% are quite happy.

But New Democratic voters aren't as pleased as you might expect. Their party made a historic breakthrough in Quebec, won the most seats and votes in their history, and are now the Official Opposition. But only 27% of their voters are happy with the results.

Though it is somewhat surprising it is as high as it is, 13% of Liberal voters and 10% of Bloc voters feel positively about what happened on May 2nd. Thirty percent of non-voters are also pleased with the result.

As for having negative feelings about the election result, only 2% of Conservative voters have some regrets. That is miniscule. Surprisingly, only 21% of non-voters feel the same way (36% are, understandably, indifferent).

Despite their historic outcome, fully 42% of NDP voters feel sad or fearful about the election results. And despite being reduced to third party status, only 54% of Liberal voters feel negatively. It is a majority, but you'd expect Liberals to be a little more upset, along the lines of the 73% of Bloc voters.

For supporters of the Conservatives and Bloc, these results come as no surprise. The Tories are pleased as punch while Bloc supporters are concerned. But both Liberal and NDP supporters are surprisingly indifferent (25% and 23%, respectively). And a far smaller portion of NDP voters than I would have expected are happy with their party's accomplishments.

How these two voting blocks will act in the coming years will be an interesting thing to watch.
Posted by Éric at 11:27:00 AM