Reported by The Toronto Star on Sunday, a new Forum Research poll for Ontario shows that the Progressive Conservatives hold a massive 15-point lead over the governing Liberals. And with the New Democrats looking good in the province, the result could be quite a drubbing for Dalton McGuinty. 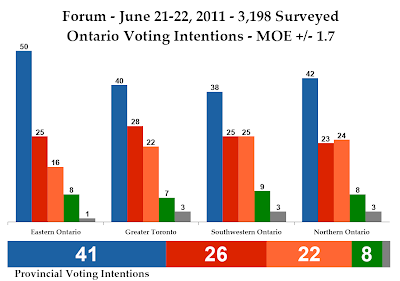 According to Forum's large poll conducted over IVR, the Progressive Conservatives lead with 41%, generally where the other pollsters have pegged the party.

The difference in this Forum poll, however, is how low the Liberals have sunk. They stand at 26%, eight points lower than the recent Ipsos-Reid poll. Whether June has worsened the situation for the Liberals or whether Forum has under-shot the Liberals by a little will have to be proven in subsequent polls.

The New Democrats stand at 22%, slightly higher than others have put the party, while the Greens are at 8%.

Long-time readers will note that I usually don't compare one poll from one firm to another by a different firm, but in this case we don't have anything else with which to compare this Forum poll.

Regionally, the Progressive Conservatives hold an impressive lead throughout the province. They are at 50% in eastern Ontario and hovering around 40% in the GTA, the southwest, and the north.

The Liberals are trailing in second in eastern Ontario (25%) and the GTA (28%), but are much closer in the downtown 416 area code. They still trail the PCs there, however. They are also tied with the NDP in southwestern Ontario and are running third in the north. 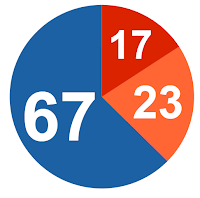 With this poll only, ThreeHundredEight projects a Progressive Conservative majority government with 67 seats.

The New Democrats form the Official Opposition with 23 seats, while the Liberals are reduced to third-party status with only 17 seats.

These results looked odd to me as well, considering that the NDP ends up ahead of the Liberals with less of the vote. I am still using the older abstract model for Ontario, so I headed over to the UBC's election forecaster for a little confirmation. I got something even wonkier there: only five seats for the Liberals.

Clearly, the New Democrats should be more efficient in turning votes into seats than the Liberals. Though the NDP isn't exactly riding high, they are riding close enough to the Liberals to be a real problem for Dalton McGuinty.

Speaking of the premier, he is considered the best person for the job by 30% of the province, behind Tim Hudak at 38% but ahead of Andrea Horwath of the NDP, who is at 22%.