A new poll by Probe Research shows that the governing New Democrats in Manitoba have closed the gap on their Progressive Conservative rivals in the province, and could squeeze another majority mandate out of the numbers. 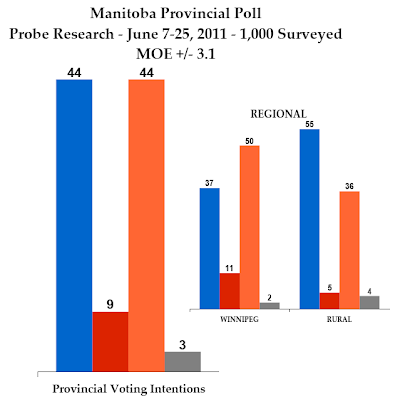 Compared to Probe's last poll conducted in March, just before the start of the federal election campaign, the Progressive Conservatives have dropped three points and now stand at 44%, tied with the New Democrats.

Premier Greg Selinger's party has gained nine points since then, much of it on the backs of the provincial Liberals who have sunk five points to only 9% support.

Selinger's handling of the flooding in the province and perhaps even the acquisition of the Atlanta Thrashers, now the Winnipeg Jets, may have played a role in his change of fortunes. The success of the federal NDP is undoubtedly another probable factor.

The New Democrats have made big gains both in the capital and in the rest of Manitoba.

In Winnipeg, the New Democrats are up eight points and lead with 50%, well ahead of the Progressive Conservatives, who are unchanged at 37%. The Liberals are down five points to 11% in the province's main city.

Outside of it, the Progressive Conservatives still lead but have dropped seven points to 55%. The NDP is up 12 points to 36%, while the Liberals are down six points to 5%.

It is a very good poll for the NDP and a very disastrous one for the Liberals. They have lost roughly one-third of their support since March, and most of it to the New Democrats.

If that kind of turnout occurred on election day, this 44-44-9 split would be transformed into a PC victory with 54% of the vote, with the New Democrats at 41% and the Liberals at 4%. 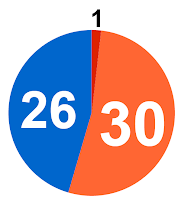 But with the results of the voting intentions poll only, ThreeHundredEight projects a slim New Democratic majority government of 30 seats. The Progressive Conservatives form the Official Opposition with 26 seats, while the Liberals retain one seat.

Manitoba is setting up to be the most closely contested of the five provincial elections scheduled for the fall. Newfoundland and Labrador, Prince Edward Island, and Saskatchewan should see landslides by their respective incumbent governments. The Liberals are behind the eight ball in Ontario, though the outcome is still up in the air, but in Manitoba it is looking like anyone's game. How Selinger handles his party in his first campaign as leader could be a major factor in deciding whether he gets to win a mandate for himself or not.
Posted by Éric at 12:40:00 PM