PQ down, Liberals and Quebec Solidaire up in CROP poll

Yesterday, La Presse reported on a new poll from CROP, taken primarily on Monday but also on Tuesday, right smack dab in the middle of the resignations of the four MNAs from the caucus of the Parti Québécois. The result is not pretty for the PQ. 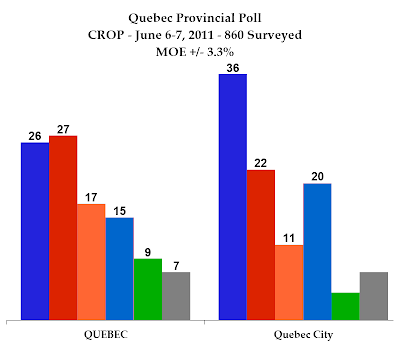 The Parti Québécois has dropped eight points since CROP's last poll taken May 11-16, and now trails the Liberals at 26%. The governing party is up four points to 27%.

For both the PQ and the Liberals to be below 30% is remarkable.

The beneficiary of the PQ's fall is primarily Québec Solidaire, which has gained five points and now stands in third at 17%. That is a huge result for them, but because of the turmoil in Quebec City it may be a stretch to claim this has anything to do with the NDP.

The Action Démocratique du Québec is down one point to 15%, while the Greens are down two to 9%.

Though this is an online poll and CROP does not report the margin of error, a random sample of 860 people would normally have an MOE of 3.3%.

But this poll was also taken on a rather momentous day, so the results might be much more of a snapshot than a serious indication of the changing mood of the Quebec electorate. Subsequent polls by CROP and the next Léger report should shed some light on what is going on.

The Parti Québécois's problems have been sparked by leader Pauline Marois's stance on the deal between the province and Quebecor to build a new arena in Quebec City. For those who don't follow Quebec politics, the legality of the deal between the province and Quebecor has been challenged, and the PQ was putting forward a motion that would have freed the deal from legal challenge. This was a bit too much for three particular MNAs of the PQ, Louise Beaudoin, Lisette Lapointe, and Pierre Curzi, and they resigned from caucus on Monday morning. Jean-Martin Aussant followed suit on Tuesday. They all criticized Marois's style of leadership as well, and the first three démissionaires are heavy weights in the party.

Though only a minority of PQ supporters think Pauline Marois should step down as leader, a majority of Quebecers think she should do so. Of course, a majority would also probably want Jean Charest to step down as well. Nevertheless, it is interesting to note that of the potential successors to Marois, Gilles Duceppe is the most popular at 36%, followed by François Legault at 24%.

The arena funding is an issue dividing the province, as 50% support the funding of the construction by the province and the other 50% do not. It is a popular proposal in Quebec City, however, and the PQ's stance on the issue has propelled it to 36% (+5) in the region, ahead of the Liberals (22%) and the ADQ (20%, -5). Results for the Greens and other parties were not reported.

Whether Marois is the leader to give Quebec a country is another reason for these four MNAs to have stepped down, particularly for Aussant and Lapointe. However, fully 82% of Quebecers think the PQ should put sovereignty aside and focus on good government. Even 71% of PQ supporters say that, though this may be a realization that a province needs to be governed well before it can consider becoming a country. 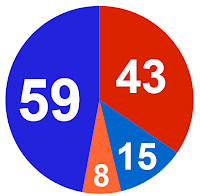 With the results of this remarkable poll, ThreeHundredEight projects the Parti Québécois would nevertheless win the election and form a minority government. The PQ's vote is far more efficient than that of the Liberals, much of it wasted as it is in super-majorities on the island of Montreal.

The PQ wins 59 seats, three short of a majority. The Liberals win 43 and the ADQ 15, while Québec Solidaire takes eight seats. As both the PQ and QS are sovereigntist parties on the left of Quebec's political spectrum (though QS is much further left), I imagine the PQ could govern with the support of Québec Solidaire.

The next election in Quebec has to take place by 2013, but with all that is going on in Quebec City it should come as no surprise if Jean Charest pulls the plug earlier. His numbers will have to improve, however, as he is no place to win his fourth election with only 27% support.
Posted by Éric at 11:34:00 AM