It might not be a tidal wave, but the tide is turning in the NDP’s favour in the four Atlantic provinces.

The latest opinion poll results from the Corporate Research Associates indicate that throughout Atlantic Canada the provincial wings of the New Democratic Party have made significant gains.

Yesterday, the Corporate Research Associates released their Atlantic Quarterly with the voting intentions results for the four Atlantic provinces. Their website appears to be down as of this writing, but when it is up and running again you can find the press releases here.

Let's get right into it, starting with Prince Edward Island. 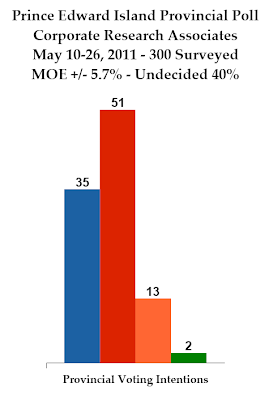 The Liberals under Robert Ghiz are still leading with 51%, but that is a drop of 11 points since February. Note that the margin of error is 5.7%, so these large variations are in fact within the MOE

Undecideds number 40% of those polled, a very high result in province that is four months away from an election.

But Robert Ghiz has things well in hand, as 69% of the province is mostly or completely satisfied with his performance as leader. He is also the favourite person to be premier at 48%, followed by the PC's Olive Crane at 19% and the NDP's James Rodd at 5%. 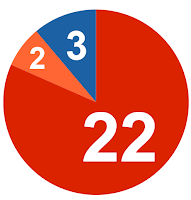 With the results of this poll, ThreeHundredEight projects the Liberals would be re-elected to a majority government with 22 seats, down five from the last projection and down two from their current standing in the Legislative Assembly.

The Progressive Conservatives win three seats (up three from the last projection, up one from current standing), while the New Democrats win two seats (a gain of two).

Aside from the return of the NDP to Charlottetown, this is generally the same election result as the province's previous vote.

Now on to Newfoundland & Labrador, the other province with an election coming up in October. 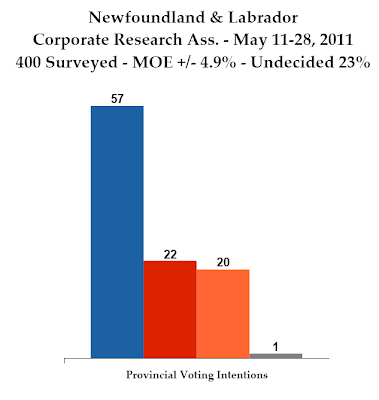 Compared to CRA's last poll from February, the Progressive Conservatives are down a massive 16 points to 57%, though that is clearly still enough to win an equally massive majority. The Liberals are up four points to 22% while the New Democrats are up big: 12 points to 20%. Undecideds are 23%, a much lower figure than we see elsewhere.

Though Kathy Dunderdale seems to be on the downswing, she is still comfortably ahead. Fully 71% are satisfied with her performance (a drop of 11 points) while 51% think she is best suited to be premier (down 13 points). The trend is not in her favour but she is a long way away from having her premiership threatened.

Yvonne Jones of the Liberals is favoured for the premiership by 16% (-2), while Lorraine Michael of the NDP's personal numbers are up nine points to 14%. The NDP's two seats wins at the federal level in the province appear to be having an effect. 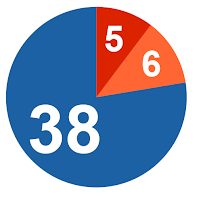 With the results of this poll only, ThreeHundredEight projects another majority government for the Progressive Conservatives. They win 38 seats, down eight from the last projection and five from their current standing in the House of Assembly.

The New Democrats win six seats, up five, and form the Official Opposition. This would be a first in Newfoundland. The Liberals win five seats, up four from February.

A more spirited opposition, perhaps, but another four years of PC rule in Newfoundland and Labrador appears on the horizon. 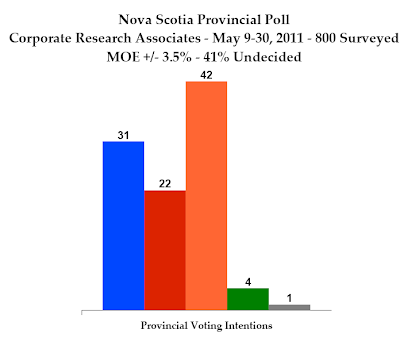 The NDP in the province is up eight points since February, and now leads with a healthy 42%. The Progressive Conservatives have moved into second with a five point gain, and they now stand at 31%. The Liberals have dropped 13 points to only 22%, while the Greens are unchanged at 4%.

That is a huge shift for the Liberals, though Stephen McNeil's popularity hasn't been hurt as much. He is down six points to 20% for best premier, behind Darrell Dexter at 28% (+5) and Jamie Baillie at 21% (+8).

It isn't all roses for Dexter, however, as only 47% are satisfied with his performance as premier. 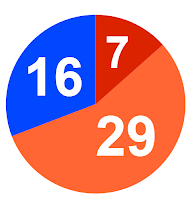 Again, with this poll only ThreeHundredEight projects that the New Democrats would be re-elected to a majority government with 29 seats. That is a big change from the split assembly I projected in February.

The Progressive Conservatives win 16 seats and form the Official Opposition, while the Liberals are reduced to seven seats.

However, Nova Scotia is not likely to have its next election until 2013. It could even be pushed to the spring of 2014.

New Brunswick is also three years away from the next election, but the province would give David Alward another majority if the vote had been held in May. 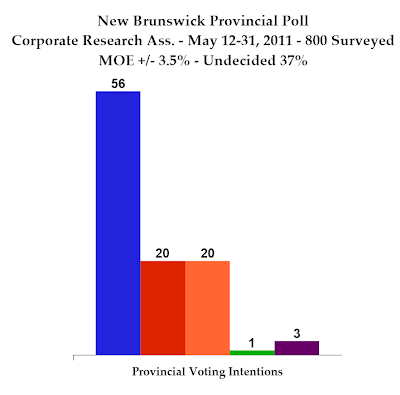 The Progressive Conservatives are down two points to 56%, well within the MOE. The Liberals are down seven points to 20%, while the New Democrats are up 12 points to tie the Liberals at 20%. The NDP's success at the federal level seems to be having its effect here as well.

The People's Alliance is at 3%, while the Greens are down to 1%.

Fully 68% of New Brunswickers are satisfied with David Alward's performance, and he is the favourite to be premier of 39%. Another 15% think the next Liberal leader would be the best premier, while 14% (+8) chose the new NDP leader, Dominic Cardy. 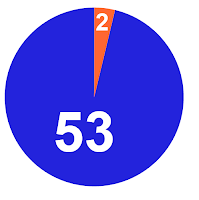 With this poll, ThreeHundredEight projects a massive majority for the Progressive Conservatives. Unchanged from February, they would win 53 seats.

The New Democrats win two seats and form the miniscule opposition, while the Liberals are shut out from the Legislative Assembly in Fredericton.

These four provinces show some significant trends. Though the gain in support in Prince Edward Island is insignificant, the New Democrats are up across the board. Their majority government in Nova Scotia looks safer, and the party could form the Official Opposition in Newfoundland and Labrador and New Brunswick. They might even win a couple seats in PEI. That is a big shift on the East Coast
Posted by Éric at 10:43:00 AM