Though we won't have another federal election until the end of 2015, federal voting intention polls are still being conducted. Accordingly, ThreeHundredEight will continue with the monthly poll averages. This month, only two polls were publicly released with complete data: one by Abacus and the other by Nanos.

Two polls by Harris-Decima were also mentioned in the media, but details are sparse. Because of that, their results have not been added to the May 2011 averages.

Also note that I am changing the method in which the monthly averages are calculated. Rather than give every single poll equal standing, I will be weighing the polls by sample size and margin of error. Each polling firm will also be counted only once per month. If a firm releases two polls in a month, the average result for the polling firm over the multiple polls will be counted towards the monthly average.

Final note, I will not be updating the monthly tracking chart for May, as I will keep the election results in that slot.

Before we get into it, however, we should take a look at the two polls individually as I have not had the time to do so this month.

The Abacus poll was taken between May 18-19 and included 1,544 respondents. This was an online poll, but a similarly sized random sample would have had a margin of error of 2.5 points.

Abacus found the situation to be much like that on election night, with all of their national results within the margin of error. The Conservatives led with 40%, followed by the New Democrats at 33% and the Liberals at 16%. Regionally, the only notable result was in Ontario, where the Conservatives led with 45% with the NDP behind at 31%. But the Liberals were down to 20%.

The Nanos poll is more recent, having been taken between May 24-29. The total sample was 1,205 people and the margin of error was 2.8 points.

Nanos found the Conservatives to be leading with 39.7%, followed by the NDP at 29.9% and the Liberals at 21.5%. In this poll, however, the Liberals were running second in Ontario with 26.3%, behind the Tories at 44%. In Quebec, the Bloc Québécois was down to 10.9%, with the Conservatives and Liberals running second and third at 21.8% and 20.3%, respectively, behind the NDP (39.1%). If the Bloc has dropped that low, they may indeed be finished.

Because of their larger sample size, Abacus was given a weighting of 52.8% in this average, with Nanos being weighted to the remaining 47.2%. 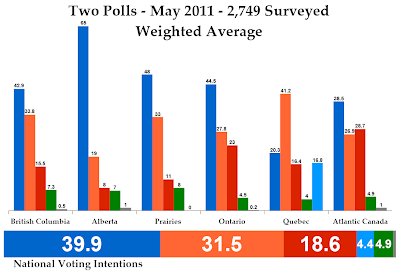 The Conservatives, New Democrats, and Liberals are virtually unchanged from their election night result, with the Conservatives averaging 39.9% support in May. The NDP is second with 31.5% and the Liberals third with 18.6%.

The New Democrats are mostly unchanged in Quebec, leading with 41.2%. The Conservatives, however, are running second with 20.3%, a marked improvement over their election result. The Bloc is barely in third with 16.8%, while the Liberals stand at 16.4% in the province.

And in Atlantic Canada, the Conservatives lead with 38.5% to 28.7% for the Liberals, the only area where Bob Rae's party is in second place. The New Democrats stand at 26.9% here. 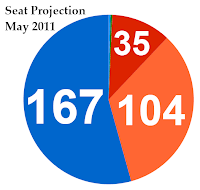 Using the seat projection model for the 2011 election, which had an average error of 2.4 seats per party and not greater than five seats for any one party when using the actual provincial vote totals, ThreeHundredEight projects the Conservatives win 167 seats with this month's poll average, one more than they currently hold.

The New Democrats and Liberals would also pick up one seat apiece, and win 104 and 35, respectively.

The Bloc Québécois is reduced to one seat in Quebec while the Greens hold on to their one seat in British Columbia.

Regionally, the Conservatives win 19 seats in British Columbia, 27 in Alberta, 22 in the Prairies, 72 in Ontario, 10 in Quebec, and 15 in Atlantic Canada.

The New Democrats win 14 seats in British Columbia, one in Alberta, five in the Prairies, 22 in Ontario, 57 in Quebec, and four in Atlantic Canada.

The Liberals win two seats in British Columbia, none in Alberta, one in the Prairies, 12 in Ontario, seven in Quebec, and 13 in Atlantic Canada.

It should come as no surprise that so soon after the election there would be so few changes. But the poor showing of the Bloc seems to have had an effect, as Quebecers are turning to other parties. Whether this will hold will be something to watch over the next few months.
Posted by Éric at 9:38:00 AM