The three most popular premiers in the country also happen to be heading into an election this fall. Their timing could not be better.

But another election in October could mean the end for one of Canada’s most consistently unpopular provincial leaders, Dalton McGuinty.

While Wall was the only premier to score over 50 per cent, both Selinger and Dunderdale attained 65 per cent approval among those who expressed an opinion. Wall tops out at 71 per cent among decided voters.

This should come as no surprise for Wall and Dunderdale, who both lead their rivals in the polls by virtually insurmountable margins and are on track to win majority governments in the fall. But this is a shift for Manitoba’s premier.

These premier polls come out every few months, and last time Kathy Dunderdale was on top. Her numbers have dropped, however. 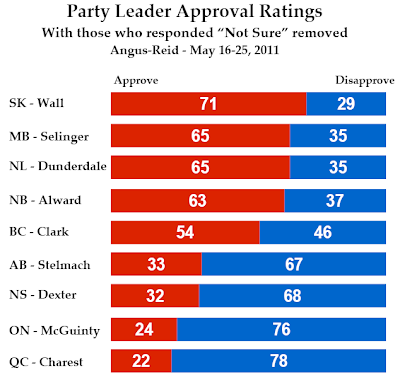 After removing the "not sures", we get a clean approval/disapproval rating which is far easier to compare across the nine provinces included.

Note: Prince Edward Island is not included in this survey. As someone at Angus-Reid told me, even in these massive 6,500-respondents surveys, PEI is still too small to get anything reliable. Consider that even with a sample of 6,500 Canadians, PEI's proportion should be around 30 people, a sample that would normally have an MOE of about 18%.

Back to the results - Brad Wall of Saskatchewan is now ranked first, with an approval rating of 71%. That is down four points from February, however.

Greg Selinger has moved from fourth to second and now has an approval rating of 65%, up 18 points. He is tied with Dunderdale, who drops 20 points to 65%, and from first place to third.

David Alward of New Brunswick is fourth, down one spot, but has improved his rating eight points to 63%.

Christy Clark debuts in fifth with 54%, far greater than the 19% Gordon Campbell had in February.

Ed Stelmach of Alberta remains in sixth, but his approval rating is up seven points to 33%. Darrell Dexter has dropped two spots to seventh, but is only down one point to 32%.

Dalton McGuinty is up two points but down one spot to eighth and 24%, while Jean Charest remains dead last. His approval is up six points to 22%, however.
Posted by Éric at 8:44:00 AM