On Saturday, Le Devoir released the results of a new Léger Marketing poll looking at the federal and provincial voting intentions of Quebecers. At the federal level, it shows the New Democrats at an all-time high. At the provincial level, it indicates that the Parti Québécois could form an extremely wobbly minority government. 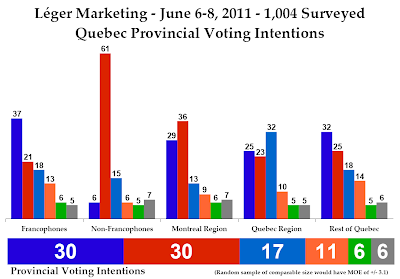 We'll start at the provincial level, where the Parti Québécois has dropped four points to 30% since early May. They are now tied with the Liberals (PLQ), who are unchanged at 30%.

The ADQ is in third, down one point to 17%, while Québec Solidaire is up two points to 11%.

The PQ still holds an important lead among francophones, though they have dropped four points to 37%. The PLQ is up one to 21%, while the ADQ is down one to 18%.

In the Montreal region, the Liberals are steady at 36% and have a decent lead over the PQ, which is down three points to 29%. The ADQ is down two to 13% in the region.

Around Quebec City the ADQ has gained 11 points and now leads with 32%, followed closely by the Parti Québécois at 25% (-8) and the Liberals with 23% (+3). It would appear that Pauline Marois's position on the arena has not helped her party in the city.

In the rest of Quebec, the PQ is down five to 32%, ahead of the Liberals and ADQ who are unchanged at 25% and 18%, respectively. 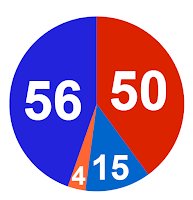 With this poll, ThreeHundredEight projects a very difficult National Assembly. The Parti Québécois wins 56 seats, a minority. The Liberals win 50 while the ADQ wins 15 and Québec Solidaire four.

How this would work in practice is hard to figure. The PQ would need the support of either the Liberals or the ADQ to govern, while the Liberals would be barely over the threshold of a majority with the support of the ADQ. I imagine this minority assembly would not last very long.

In terms of who would make the best premier, Jean Charest is back on top with 36% support of those who expressed an opinion. That is, amazingly, more than his party's level of support. Marois is next with 27%, while Amir Khadir of QS is third with 20%. Gérard Deltell, leader of the ADQ, only stands at 16%.

But what if we inject François Legault's CAQ into the mix? This political action group which will probably become a party at some point in the next year would garner the support of 33% of Quebecers, ahead of the PQ at 21% and the PLQ at 20%. If he joins with the ADQ, something which both the CAQ and the ADQ have said they would not do, the merged party would have the support of 41% of Quebecers and easily sweep the province.

But even a Legault-ADQ party does not have the level of support of the New Democrats. 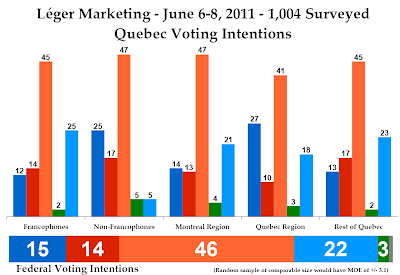 The New Democrats have the support of 46% of Quebecers, three points more than they had on election night. In fact, this 46% is the highest the NDP has ever polled in Quebec.

The Bloc Québécois is second with 22%, followed by the Conservatives at 15% and the Liberals at 14%.

This is generally what the election result was, but with the extra support the NDP has it could win a few more seats from their rivals in the province, particularly the Bloc and the Liberals.

The Bloc is well behind in every part of the province. They have the support of 25% of francophones, and are running second behind the NDP in Montreal and the rest of Quebec.

The Conservatives still have their base of support around Quebec City, at 27%. The Liberals, meanwhile, are only at 13% in Montreal and, more shockingly, are in third place at 17% among non-francophones. They would be hard pressed to hold on to their seats on the island of Montreal with these numbers.

Politics certainly are interesting in Quebec at the moment. But, then again, when have they ever not been?

A few administrative notes. I have completed my study of how the projection model worked in the 2011 federal election, and I will be presenting the results soon. Specifically, I looked at how the various "factors" applied to each riding worked out when using the actual provincial-level results. As this is now complete, I am working on detailed riding-by-riding projections for the provinces, starting with Quebec. I will then move on to Ontario, Manitoba, Saskatchewan, Newfoundland & Labrador, and Prince Edward Island, in that order.

Secondly, earlier this week ThreeHundredEight surpassed two million views since July 2010, when the traffic counter I am using began recording. Thank you!
Posted by Éric at 2:19:00 PM