The Saskatchewan projection model is now complete, and ThreeHundredEight.com will now be maintaining up-to-date riding by riding projections for the Saskatchewan election, scheduled to take place in November.

Now, there have not been many Saskatchewan polls so the current projection is largely based on the latest poll from Insightrix Research. Nevertheless, more polls should appear as we approach the election. 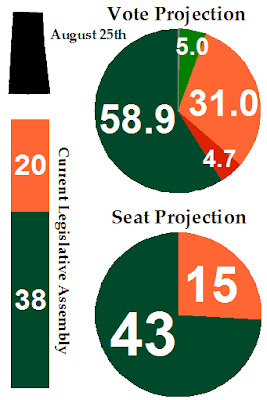 The first projection for Saskatchewan has Brad Wall's Saskatchewan Party (SP) at 58.9% of the vote, with the New Democrats trailing with 31%.

The Greens stand at 5% in the projection, while the Liberals are at 4.7%.

The Saskatchewan Party wins 12 seats in the north, 19 in the south, five in Regina, and seven in Saskatoon.

The New Democrats win three seats in the north, one in the south, six in Regina, and five in Saskatoon.

It is unlikely that this is going to change any time soon. Most of the ridings in Saskatchewan are heavily tilted towards one party or the other. Only one riding is projected to have a margin of 5% or less, and it is one in which the SP leads.

This gives the Saskatchewan Party a range of 42 to 43 seats, with the NDP at between 15 and 16 seats.

The models for Newfoundland and Labrador and Prince Edward Island are also completed, but need to have the charts and vote projection finished. Once they are, I will present ThreeHundredEight's projections for these two Atlantic provinces.
Posted by Éric at 1:38:00 PM