Yesterday's sad news has been a blow to everyone who follows Canadian politics. Jack Layton has been a fixture of the Canadian political landscape since he became leader of the New Democrats in 2003, and he reinvigorated his party and brought it to new heights. Indeed, the loss of this stellar politician and Canadian leader is made all the more tragic by its coming after such a great achievement. Jack Layton and all of those who supported him had reason to hope for a bright future. Though the future they envisioned can still happen, it is very sad to think that Jack Layton will not get to be a part of it.

For my own part, I first began to pay close attention to Canadian politics around the time of Jack Layton's successful leadership run and the last leadership race of the old Progressive Conservative Party - one that quickly resulted in the merger of the Tories and the Canadian Alliance. For myself and many others, the next phase of Canadian politics will be a very different world. But thoughts of what comes next for the NDP and Canadian politics in general can wait.

A federal poll from Abacus Data was released late last week. It would have been the subject of some analysis here on ThreeHundredEight.com, but in light of yesterday's news and the transformation of Canadian politics it will entail, I will instead post the results of the poll without comment and merely for future reference.

The poll represents a last snapshot of the federal Canadian political landscape as it had existed. 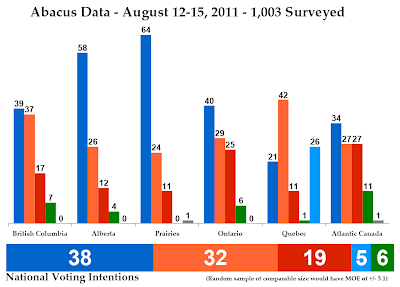 Many have commented on the positive politics that Smilin' Jack tried to bring to Parliament Hill, and how he was respected and liked even by those on the opposite side of the aisle. We may not see another political leader like Jack Layton for some time.
Posted by Éric at 10:23:00 AM