With the first projections for Prince Edward Island and Newfoundland and Labrador, all five provinces scheduled to have elections this fall now have running seat projections models under way at this site.

In Newfoundland and Labrador, ThreeHundredEight's first projection is a majority government for Kathy Dunderdale, with the Liberals and New Democrats tying for second. 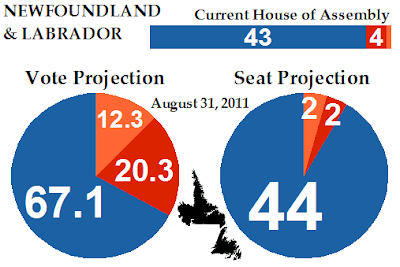 With 67.1% of the vote, the Progressive Conservatives win 44 seats, increasing their current crop of MHAs by one. The Liberals place second with 20.3% and win two seats, while the New Democrats also win two seats with 12.3% of the vote.

Now, a poll has not come out of the province since the Liberals named Kevin Alyward their new leader. Whether the departure of Yvonne Jones and the arrival of Alyward changes anything remains to be seen. But until we get some new polling data, this is what we're looking at.

The PCs win 13 seats in the St. John's region, nine seats on the Avalon and Burin peninsulas, 20 seats in the rest of Newfoundland, and two seats in Labrador.

There are not a lot of close races in Newfoundland and Labrador. The Tories are leading by 5% or less in one seat and trailing by that amount in another, giving them a range of 43 to 45 seats.

Though the colours are different, Prince Edward Island also has a landslide on its hands. 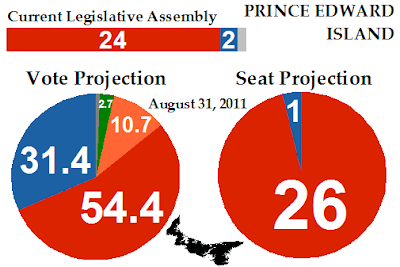 With 54.4% of the vote, Robert Ghiz's Liberals are projected to win a massive majority of 26 seats, leaving one seat and 31.4% of the vote to Olive Crane's Progressive Conservatives. The New Democrats are shut out but win 10.7% of the vote, while the Greens take 2.7%.

This is another province with few polls, and the small size of the ridings (roughly 3,000 people vote in each of them) make this province more difficult to project.

The Liberals win all five seats in Charlottetown, all eight seats in central PEI, and all seven seats in the western part of the island. They win six seats in eastern PEI, which is where the Tories win their one seat.

There are no close races in the projection, leaving the "range" at 26 Liberal seats and one PC seat. 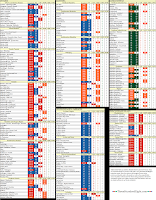 ThreeHundredEight is now completely prepared for the fall election season. As long as there is a poll to add, I will update the projections every day starting next week.

EDIT: After a question from a commenter, I should point out that for all provinces I am assuming parties (and independents) will run candidates in the same ridings that they did in the previous election, until the election agencies in each province releases the official candidate list. At that point, I will update the projections to accurately reflect which parties and which independents are running in each riding.

I think there could still be a few surprises. While the Saskatchewan Party and the PEI Liberals look like locks to be re-elected, the Manitoba race is looking very close and Ontario could still go either way. And in Newfoundland and Labrador, the change-up in leadership throws everything up in the air. While Dunderdale's PCs are still the odds-on favourites, it makes the race one to watch.
Posted by Éric at 8:35:00 AM