Saskatchewan is an enigma, at least from a polling perspective. Even Prince Edward Island, with a population smaller than that of Regina, is polled more often than Saskatchewan. But out of the mists of the prairies comes a new Saskatchewan poll, demonstrating in part why so little polling is conducted in the province outside of an election. 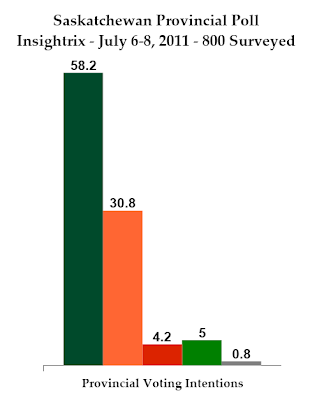 This is virtually unchanged from Insightrix's last poll conducted in April 2010. Since then, the Saskatchewan Party has dropped 0.2 points while the NDP is up 2.1 points. In other words, in a poll of this size, there has been no change whatsoever.

But the Liberals are in a bit of trouble, standing at 4.2% and behind the Greens, who are at 5% support in this online panel poll.

Insightrix also reports the 1% of voters who would spoil their ballots, something not recorded as a percentage of the vote share in an election. Removing the spoiled ballots bumps the Saskatchewan Party up to 58.8%, the NDP to 31.1%, and the Greens to 5.1%. Seeing as this is standard practice in other polling firms, I will be recording the poll's results as such in the chart below and in the projection in the right hand column.

Speaking of which, the seat projection model for Saskatchewan is almost complete. It is close enough to completion that I can use it for this poll. 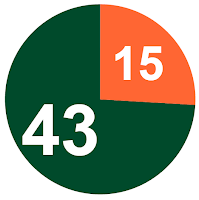 With the results of this poll only, the Saskatchewan Party wins 43 seats and another majority government. The New Democrats are reduced to 15 seats, while the Liberals and Greens are shut out of the legislature.

The Saskatchewan Party wins five seats in Regina, seven in Saskatoon, and 31 in the rest of Saskatchewan.

The New Democrats win six seats in Regina, five in Saskatoon, and four in the rest of Saskatchewan.

The rural/urban divide is plainly obvious in this projection. The NDP and the Saskatchewan Party run a close race in the province's two largest cities, but outside of those cities it is a Saskatchewan Party romp. And, in fact, two of the NDP's four seat wins outside of the major urban centres come from minor urban centres like Moose Jaw and Prince Albert.

The numbers have moved so little in the last 15 months that it seems unlikely they would move any more in the next three months. Of course, the campaign trail has its own set of surprises but Brad Wall is a popular premier and the province is doing well, so it would seem that his re-election is as much of a sure thing as exists in politics.
Posted by Éric at 10:03:00 AM