With the release of a new poll by Forum Research, the Ontario projection has been updated. Though there has been very little change, the race has narrowed in many ridings and a worst case scenario for the Tories could see them win one less seat than the Liberals. 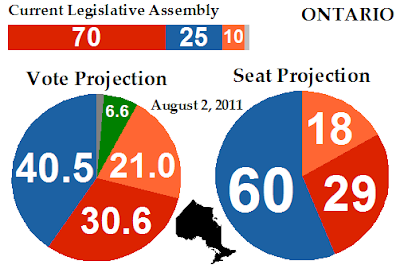 As only one seat has changed, there has been no shift in the regional breakdowns except in the Greater Toronto area.

There, the Tories are now projected to win 12 seats, down from 13, while the Liberals are up one to six.

Aside from that, the PCs are projected to win the most seats in every part of the province except Toronto (Liberals) and the North (NDP).

But it is in the marginal seats that the election will be decided, and the number of these seats has risen.

The PCs are leading by 5% or less in 16 seats and are trailing by that amount in nine seats.

This puts the Progressive Conservative range at between 44 and 69 seats, down from the range of 48 to 70 seats in the previous projection. It still means that 62% of the range puts the Tories in a majority situation, but a minority is still a possibility, at 38% of the range. Worse still is that with the Liberal range standing at 19 to 45 seats (an increase from 18 to 41), there is a small chance that the Liberals could win one more seat than the Tories.

The breadth of the NDP range, at 18 to 20 seats, is unchanged. But there is now less overlap with the Liberals than there was in the past projection, lowering the chances of the NDP forming the Official Opposition. Though the NDP has gained ground on both the Liberals and Tories in the popular vote in this projection, the reduction of PC support has benefited the Liberals more, as they are in more one-on-one races with the Tories.
Posted by Éric at 10:26:00 AM