Note that ThreeHundredEight will be on hiatus for a few days next week. Articles in The Globe and Mail and the Huffington Post will still be published in the meantime.

With a new Ipsos-Reid poll showing a narrowing gap between the Liberals and the Progressive Conservatives, the new projection for Ontario is narrowing as well.

The poll pegs Tory support at 38%, down four points from Ipsos-Reid's last poll in July. The Liberals are up five points to 36%, while the New Democrats are up one point to 23%.

However, this poll had a small sample of 400 people, giving it a margin of error of +/- 4.9%, 19 times out of 20. That is relatively large, and means that the shifts in support are not statistically significant. That does not mean they aren't an indication of something happening, however.

The samples used in the regional breakdowns of this poll are too small to consider, but in the GTA the Liberals now lead with 47% to the Tories' 32%. Nevertheless, in a larger Ipsos sample Tim Hudak topped the premier numbers at 38%, ahead of Dalton McGuinty who scored 33%. Andrea Horwath stood at 24%. Hudak led the other two leaders on all the important indicators, such as trust and competence.

This poll alone, however, would give the Liberals a minority government of 53 seats, with the Tories taking 35 and the New Democrats 19. 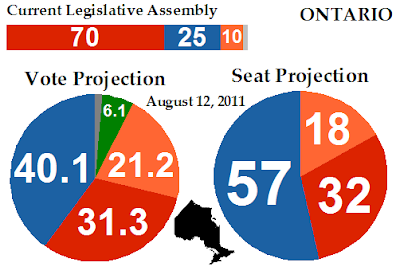 With this poll, the Progressive Conservatives have dropped 0.4 points since the August 2 projection to 40.1%, while the Liberals are up 0.7 points to 31.3%.

That means the gap has narrowed from 9.9 points to 8.8 points.

This has resulted in the Progressive Conservatives dropping three seats to 57. These three seats are all Liberal gains in the projection, and the party now stands at 32. The New Democrats are unchanged at 18 seats.

The Tories need 54 seats to have the slimmest of majorities, so they are starting to descend into dangerous territory.

They have dropped four seats since the first projection of July 20, all of which have gone to the Liberals. The New Democrats, however, have remained stuck at 18 seats.

Regionally, the Liberals picked up a seat each in Greater Toronto, the Hamilton/Niagara region, and in southwestern Ontario.

There are still a lot of close races in Ontario, with 26 of them being projected to have a gap of five points or less between the winners and the runners-up.

The Liberal range is now 22 seats to 48 seats, making a minority government possible but also putting them outside of the NDP's range, which is still between 18 and 20 seats.

All of this points to a closer race forming in the province. It should be an interesting campaign.

I am getting very close to having the models for Saskatchewan, Newfoundland and Labrador, and Prince Edward Island ready. When I return from my hiatus I should be able to start presenting ThreeHundredEight's first projections for these three elections.
Posted by Éric at 10:57:00 AM