A new poll from Nanos Research for CTV and The Globe and Mail released during my absence shows a narrowing race between the provincial Tories and the governing Liberals, echoing a flash poll conducted by Ipsos-Reid earlier this month. 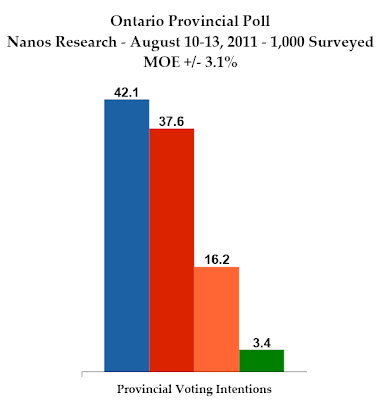 For the Progressive Conservatives, this is very little change since Nanos's last poll in May, but with 42.1% support the Tories hold a 4.5-point lead over the Liberals, who have gained 3.6 points and now trail the PCs with 37.6%.

That is a good gain for the Liberals, coming primarily off the backs of the New Democrats. They have dropped 2.5 points to 16.2%, while the Greens are down two points to 3.4%.

Another poll on leadership found that Dalton McGuinty has now squeezed ahead of Tim Hudak on who would make the best Premier, with 30% support to 29%. Andrea Horwath is in third with 12%.

So things appear to be getting better for the Premier, with only a couple weeks left to go before the start of the campaign.

The projection has been updated to include this new poll, but this one set of data isn't enough to shift the balance of the projection in too dramatic a fashion. In September, polls will be weighted on a daily basis but as we are still in a pre-writ period they are being weighted on a monthly basis. 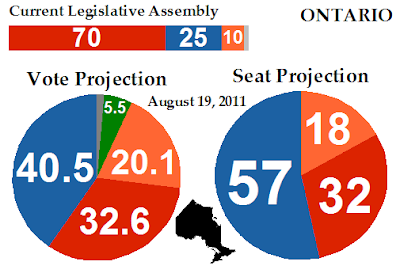 There have been no seat changes in the projection, with the Progressive Conservatives clinging to a majority with 57, the Liberals safely in Official Opposition territory with 32, and the New Democrats almost doubling their current haul of MPPs with 18.

The Progressive Conservatives are now projected to have the support of 40.5% of Ontarians, up 0.4 points since the last projection of August 12.

The race has gotten much closer, however, as many seats are now on the bubble. In several cases, decimal points separate the winners from the runners-up.

This makes the Tory range at between 39 and 64 seats, worse than August 12th's 41-66 seats. It means that only 42% of the PCs' range is in majority territory. The Liberal range, up from 22 to 48 seats to 24 to 50 seats, now comfortably straddles the range of the Progressive Conservatives. And with the NDP range at between 18 and 20 seats, the Liberals are quite safe from the prospect of finishing third.
Posted by Éric at 2:36:00 PM