NDP soft in Quebec, strong in BC in new Angus-Reid poll

The latest federal poll from Angus-Reid, taken earlier this week, shows that the top-line numbers have moved very little for any of the parties. But at the regional level, some shifts have taken place. 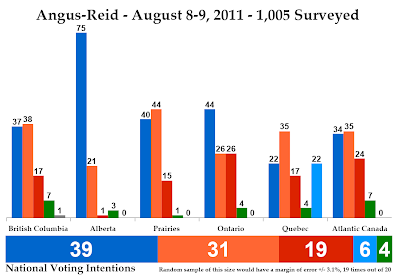 Nationally, the Conservatives lead with 39%, followed by the New Democrats at 31% and the Liberals at 19%.

The Bloc Québécois stands at 6% and the Greens at 4%.

Aside from a few decimal-point changes, this is exactly what happened on election night.

But regionally, most of the results are quite different.

Except, oddly, in Ontario. There the Conservatives still lead with 44% and the Liberals and NDP are deadlocked in second, with 26%.

Nationally and in Ontario, this generally jives with what others polls have shown since the election. The Nanos poll conducted last week differs, but it was taken on completey separate days. Conceivably, both these polls could be correct.

Where they agree with one another is in Quebec. In the Angus-Reid poll, the NDP has dropped to 35% (Nanos had them at 34%), indicating that the departure of Jack Layton has had a real effect on votes there. The Conservatives and Bloc are tied in second with 22%, while the Liberals trail with 17%. As 85% of the last election's Bloc voters still support the party, according to one of the questions in this poll, it appears that most of the NDP's lost support has gone to the Conservatives and Liberals. It is possible, then, that some of the federalist votes the NDP picked up in the last election are reverting to the federalist parties they supported before the last election due to Nycole Turmel's past.

The NDP makes up for the drop in Quebec with a huge number in British Columbia. They lead there with 38%, ahead of the Tories at 37%. The Liberals are at 17%. The NDP also puts up good numbers in Alberta, and leads in the Prairies and Atlantic Canada. The Conservatives are still very strong in Alberta and competitive in Atlantic Canada, but their 44% in Ontario is what keeps them in power.

Angus-Reid, oddly, even asked what people thought of Vivian Barbot's performance as interim head of the Bloc. Considering she has barely been visible and isn't an MP, it comes as no surprise that she scored 5%. 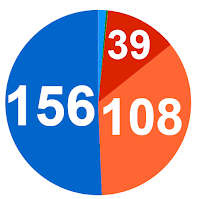 This poll would result in the Conservatives winning 156 seats and holding on to their majority by the skin of their teeth. The New Democrats win 108 seats, the Liberals 39, the Bloc Québécois four and the Greens one.

The Conservatives win 17 seats in British Columbia, 27 in Alberta, 11 in the Prairies, 70 in Ontario, 13 in Quebec, 16 in Atlantic Canada and two in the north.

The New Democrats win 14 seats in British Columbia, one in Alberta, 14 in the Prairies, 22 in Ontario, 47 in Quebec, nine in Atlantic Canada and one in the north.

The Liberals win four seats in British Columbia, three in the Prairies, 14 in Ontario, 11 in Quebec, and seven in Atlantic Canada.

Obviously, the four Bloc seats come in Quebec and the Greens hold on to their British Columbian seat.

The poll also looked into the Turmel affair, but I think the results are far less informative than they appear at first glance.

Firstly, 43% of Canadians followed the story very or moderately closely, with only 26% not following it closely at all. In other words, 74% of Canadians are aware of the issue.

While 41% of Canadians say they are concerned with having Turmel as interim leader of the NDP, 51% said they were not concerned. Demonstrating how this sort of thing isn't much of a problem in Quebec, 64% of respondents in that province were not concerned. A linguistic breakdown of that number would have been fascinating.

Now, 41% is a huge swathe of the population. Other parties don't have this kind of issue that would "concern" Canadians. But what would the response have been had Angus-Reid asked Canadians whether they were concerned with having Stephen Harper as Prime Minister, or Bob Rae as interim leader of the Liberals? I imagine those numbers would have been relatively significant, but nevertheless meaningless.

The same issue exists with the question of whether the NDP should replace Turmel. Only 34% of Quebecers said she should be replaced, while 45% of Canadians as a whole said so. That number drops to 29% among New Democratic supporters.

But again, ask Canadians if Harper or Rae should be replaced and at least one-third of respondents would probably say yes, broken down pretty clearly along party lines. People also generally dislike politicians, and putting them out of a job is always a popular opinion. So Angus-Reid should have asked about the replacement of Harper and Rae to give us some basis of comparison.

There is little that we can take this poll as conclusive evidence that something significant has happened. The only notable thing in this poll, in conjunction with Nanos's poll from last week, is that the New Democrats seem to be faltering in Quebec after polling above their election result for the first few months after the ballots had been cast. Is it a honeymoon effect, a mere statistical wobble, or something related to Jack Layton and Nycole Turmel? Time will tell.
Posted by Éric at 11:06:00 AM