A month of tremendous change, April saw the New Democrats storming from a distant second to a narrow first. Thomas Mulcair may be in the midst of a honeymoon, but it is quite the honeymoon for the party - particularly in Quebec. Since the monthly federal averages were first calculated in January 2009, the New Democrats in April 2012 put up their best results federally and in British Columbia, Ontario, and Atlantic Canada. 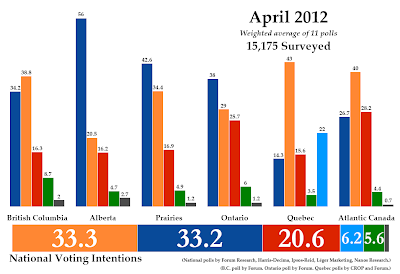 During the month of April, 15,175 Canadians were surveyed in six national polls and five provincial polls (in British Columbia, Ontario, and Quebec).

The New Democrats led in April with an average of 33.3% support, a gain of 4.1 points since March. That is their best result on record, surpassing the 32% the party scored in September, shortly after Jack Layton's death. 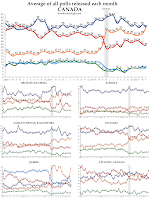 The most significant shift in support has taken place in Quebec, where Mulcair's leadership win has had the greatest effect. The New Democrats were up a massive 12.8 points (and this in a total sample of 5,651 Quebecers) to 43%, putting them back to where they were in the May 2011 election and in the months just following Layton's passing. It is an incredible rebound for the party.

Atlantic Canada also saw a great deal of change, with the New Democrats picking up 7.3 points to reach 40% support, their best result on record (their previous best had been 36% in September). The Liberals trailed with 28.2%, a gain of 1.6 points, but a gap of this size between first and second has not existed in the region since August 2010. The Conservatives were down 6.6 points to 26.7%, their lowest result since that month. The Greens were down 0.5 points to 4.4%.

The only Conservative gain since last month took place in Ontario, where the party averaged 38% support, up 0.2 points. The New Democrats surged into second with a gain of 2.2 points, putting them at 29% and their highest result on record. The Liberals dropped to third with a 2.3-point decrease to 25.7%, their worst result since September and their third consecutive month of decline. The Greens were up 0.2 points to 6%.

In British Columbia, the New Democrats have opened up their widest lead on the Conservatives since at least January 2009, picking up two points to hit 38.8% support. The Conservatives, who have been dropping or stagnant for six months now, slipped 1.3 points to 34.2% in the province. The Liberals were down 0.9 points to 16.3% (a third month of decline) while the Greens were unchanged at 8.7%. They have held around that level of support for four months. 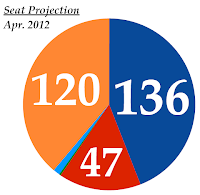 Though the New Democrats hold the narrowest of leads federally, they nevertheless trail the Conservatives in the seat projection on these numbers. An April election would have delivered 136 seats to the Conservatives, a drop of eight since March. The New Democrats would have won 120 seats, a huge gain of 42 seats since last month's projection, while the Liberals would be down 11 seats to 47. The Bloc Québécois, projected to be able to win 27 seats in March, wins only four with these numbers, while the Greens hold on to their one.

The Conservatives win 16 seats in British Columbia, 27 in Alberta, 18 in the Prairies, 61 in Ontario, four in Quebec, nine in Atlantic Canada, and one in the North.

The New Democrats win 16 seats in British Columbia, one in Alberta, seven in the Prairies, 25 in Ontario, 60 in Quebec, 10 in Atlantic Canada, and one in the North.

The Liberals win three seats in British Columbia, three in the Prairies, 20 in Ontario, seven in Quebec, 13 in Atlantic Canada, and one in the North.

In the expanded 338-seat House, the Conservatives would likely win 154 seats to 129 for the NDP and 50 for the Liberals.

The NDP and Liberals could combine for a majority larger than the one the Tories currently enjoy, and with a combined 53.9% support it would be difficult to question the legitimacy of such an arrangement. But for the New Democrats to come out ahead on their own, they desperately need to close the gap in Ontario. They are doing as well as can be expected in every other region. Ontario is the only hold-out.

The Conservatives have some work to do. British Columbia is slipping away and their grip on Saskatchewan is looking very weak. Add to that a few seat losses in Atlantic Canada and a narrowing (though still comfortable) gap in Ontario, and the Tories are in a difficult position. Of course, this is not unusual early in a majority mandate, but it is worth noting that the Conservatives were holding their support one year after their 2008 election win. Some might say that is due to the minority situation forcing the Conservatives to be in constant seduction mode, but it is difficult to argue that the Tories have toned down their campaigning machine.

And for the Liberals, they are in deep trouble. A new leader might right the ship, but that is the mirage the party has been chasing for almost a decade. They are below 17% support in the West, have fallen to third in Ontario, are 12 points behind in Atlantic Canada, and are only holding on to their Montreal Island seats in Quebec. They might be playing the long game, and 2015 is indeed a long time away, but unless Mulcair really trips up it is hard to imagine a comeback in three years' time.
Posted by Éric at 9:43:00 AM