After last week's teaser, Harris-Decima has completed and released the full results of their regular two-week survey. It increases the NDP lead by one (the last week must have been a good one for them) and points to the New Democrats being capable - for the first time, I believe - of winning the most seats in the House all on their own. 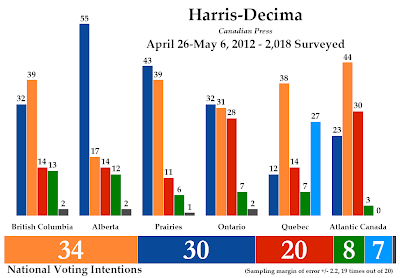 Since this poll incorporates the data from Harris-Decima's release last week, it is more instructive to compare the results to their last full two-week survey of Mar. 22 to Apr. 2.

The New Democrats are up two points since then to 34%, while the Conservatives have dropped four points to 30%.

The Liberals are up one to 20%, while the Greens are unchanged at 8% support.

As you can see, the weighted averages of all polls now give the New Democrats an outright lead of 33.4% to 32.4% for the Conservatives.

Harris-Decima shows a remarkably close race in Ontario, with the three parties virtually tied. The Tories are down nine points since the end of March and beginning of April to only 32%, trailed closely by the NDP at 31% (+5) and the Liberals at 28% (+4).

Things are stable in Quebec, with the NDP down one point to 38% and the Bloc Québécois up three points to 27%. The Liberals are unchanged at 14%, while the Conservatives are down two to 12%. The seat projection gives the New Democrats the plurality of seats for, if I am not mistaken, the first time here on ThreeHundredEight. It is likely the first time since at least the late 1980s, in that brief period where Ed Broadbent was on top.

With Harris-Decima's numbers, the New Democrats would win 128 seats, with the Conservatives winning 112 and the Liberals 58. The Bloc Québécois would win nine seats and the Greens one.

The Conservatives win 15 seats in British Columbia, 27 in Alberta, 16 in the Prairies, 47 in Ontario, four in Quebec, two in Atlantic Canada, and one in the North. In the expanded House, their share would likely increase from 36.4% of all seats to 37.9%, or 128.

The Liberals win three seats in British Columbia, one in the Prairies, 32 in Ontario, seven in Quebec, 14 in Atlantic Canada, and one in the North. They would likely win 62 seats with the new boundaries.

Harris-Decima lays out the path to a Mulcair victory - the NDP continuing its dominance of Quebec and winning British Columbia and Atlantic Canada, while increasing their representation in the Prairies and Ontario. But the New Democrats actually need the Liberals in Ontario, as in this case it is that party that unseats a lot of Conservatives and gives the plurality of seats nationwide to the NDP.

The Conservatives are certainly in trouble if the race in Ontario becomes as close as this. They have faltered greatly in Atlantic Canada to the benefit of the NDP, and are trailing in British Columbia in almost every poll. That is a somewhat varied clientele for them to have to win back, especially when you add Saskatchewan to the mix.

But has Thomas Mulcair's honeymoon hit its peak? Have Stephen Harper's troubles caused his party to hit rock-bottom, and the only way to go now is up? Or is this what we can expect for the next three years, the two parties vying for top spot in the mid-30s, much like the Liberals and Conservatives did for most of the minority era? Interesting times.
Posted by Éric at 12:29:00 PM