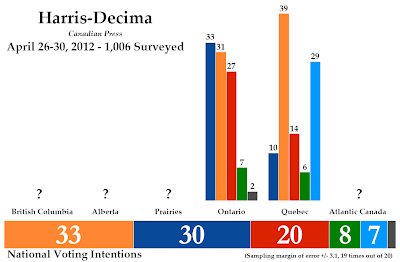 Unfortunately, Harris-Decima will not be releasing any of the regional results outside of Ontario and Quebec.

Nationally, however, the New Democrats are up one point from Harris-Decima's Mar. 22-Apr. 2 poll and now lead with 33% support. The Conservatives are down four points to 30%.

Though this puts the lead well within the margin of error, a three point edge is nevertheless a strong indicator that the NDP is very likely in front.

The Liberals are up one point to 20%, while the Greens are unchanged at 8% support. The Bloc Québécois has 7% at the national level.

The race is a very close one in Ontario, where the Conservatives have dropped a statistically significant eight points to reach 33%, only two points up on the NDP (themselves up by five points). The Liberals have gained three points and have 27% support, while the Greens are at 7%.

In Quebec, the New Democrats are unchanged at 39% support while the Bloc Québécois is up five points to 29%. The Liberals are steady at 14% while the Conservatives are down four points to only 10% support.

The Bloc number is an interesting one. Since Thomas Mulcair became leader of the NDP, the Bloc's support has been registered at anywhere between 16% and 29%. On the one hand, the Bloc is in serious danger of being dealt a final death blow, on the other hand they are in a decent position. During the NDP interregnum, the Bloc's support picked up and the polls were in general agreement. But before the NDP dropped in Quebec, we were having the same problem in judging the Bloc's support. It would appear that we are returning to that uncertainty.

It is worth noting that with this Harris-Decima poll, the weighted federal poll averages (at the top of this page) now put the Conservatives and the New Democrats dead even at 33% apiece.

Though Harris-Decima has opted not to release all of their information (full transparency is always best, but it is up to them and their media partners in the end), it is still possible to do a rough seat projection by applying the national swing from the 2011 election to the mystery provinces.

UPDATE: Harris-Decima tells me that they decided not to release the regional data for anything other than Ontario and Quebec because of small sample sizes. Harris-Decima normally conducts polling over two-week periods with samples of 2,000, but in this particular case they only did a poll of 1,000. I am told that they will return to their usual larger polls with more detailed breakdowns next time. 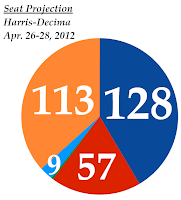 Although it is possible that the actual results of the Harris-Decima poll, say, give the NDP a big lead in British Columbia that would change things to a significant degree, with a more even-keeled application of the shifts in support from the last election the seat projection for this poll demonstrates the problem the New Democrats have with vote efficiency.

Though leading by three points, this poll would deliver only 113 seats to the New Democrats and 128 to the Conservatives, with the Liberals at 57, the Bloc Québécois winning nine, and the Greens holding one.

The problem is, as always, Ontario and the West. The Conservatives' big advantage in Alberta and the Prairies is made up for by the NDP's sweeping of Quebec, but Ontario is a thorn in the NDP's side. They need to have a significant lead over the Conservatives in order to take a big chunk of the seats.

Instead, the Conservatives win 50 seats in Ontario with this poll and three in Quebec, with 75 seats being won in the rest of the country (where we do not know the real results of Harris-Decima's poll).

The New Democrats win 27 seats in Ontario and 56 in Quebec, with the remaining 30 being won in the rest of the country.

The Liberals win 29 seats in Ontario, seven in Quebec, and 21 in the rest of the country.

Nevertheless, the New Democrats would likely emerge from these results leading a government, as they could potentially combine with the Liberals for a majority. Perhaps that is enough for the NDP, and as they would have won the popular vote in this hypothetical election their legitimacy would be difficult to question.

Though Ontario is still problematic for the NDP, trailing by two points is the best result I have for them in my records going back to the beginning of 2010 (and undoubtedly long before that as well). If other polls confirm that the Conservatives and New Democrats are running neck-and-neck in this battleground province, then we can say that the NDP is heading in the right direction.

But they need more than a neck-and-neck race if they are to definitively topple the Conservatives. Though it is quite possible that the New Democrats could out-perform expectations in Ontario if they do start getting close to the Tories, the numbers are hard to find for the kind of swing they need. At least eight more seats in Ontario would need to swing from the Conservatives to the NDP with these numbers, and though I can identify eight potential swing seats for the NDP in Ontario over-and-above the projected results, I can only identify eight seats and they start to push the boundaries of plausibility. The party still has a long way to go.
Posted by Éric at 10:12:00 AM