Angus-Reid released a new poll today, showing how Canadians and Britons feel about Barack Obama and the US Presidential Election. In short, Canadians like the American President. A lot.

But who would Canadians vote for if they had a say in the American election? If Canada was the 51st state, we would be bluer than Vermont. We'd even give Washington, D.C. a run for being the safest electoral college votes for the Democrats. 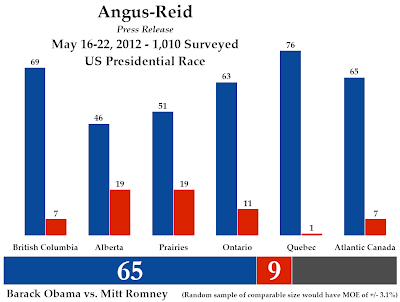 In a straight-up vote between Obama and Romney, 65% of Canadians would opt for the incumbent president. Only 9% would vote for the Republican candidate.

27% of respondents said they weren't sure or would vote for neither.

If we take those out of the equation, we get decided support for Barack Obama sitting at 88%, with Mitt Romney garnering 12% support.

To put that in context, Washington, D.C. voted 92% in favour of Obama in 2008. The Democrats took 72% of the vote in Hawaii and 67% in Vermont. The President is scoring a little less than 60% in those two states right now.

Angus-Reid was kind enough to give me the regional breakdown of these voting intentions, and they are quite remarkable. Only in Alberta does Obama not get a majority, with 46% to 19% for Romney. Obama gets his best result in Quebec, where 76% would vote for him. Only 1% would vote for Romney - and he speaks French!

But that is with the large number of people who did not opt for either candidate. If we take those out, Obama scores 71% in Alberta, 73% in the Prairies, 85% in Ontario, 90% in Atlantic Canada, 91% in British Columbia, and 99% in Quebec. These are numbers that would make Danny Williams blush.

Before I got the details I had intended to run the numbers through the projection model, but suffice to say that Obama would likely win every single seat in the country with these levels of support.

But what would this mean in a hypothetical American election where Canada's 10 provinces were US states?

A quick calculation indicates that Canada's 10 states would total 58 electoral college votes, based on how they are portioned out in the United States. That bumps up the total number of votes in the US to 596, meaning 299 would be needed to win the election (I'm sure that Canada's 10 states would result in some changes to the calculations, but let's leave that aside for now).

We can safely assume that Canada's 58 votes are in the bag for Obama, meaning that he would only need to win 241 of the remaining votes, or 44.7% of those votes in the actual 50 US states.

Using the New York Times' Electoral Map, which currently allocates 217-votes' worth of states to Obama, we only need to give him Pennsylvania and New Hampshire to get him to the 241-vote mark. That means, with Canada plumping for the Democrats, Mitt Romney could win Florida, Ohio, Virginia, Wisconsin, Iowa, Colorado, and Nevada of the "toss-up" states and still lose.

Of course, Barack Obama will not have the luxury of Canadian statehood when Americans go to the polls in November. But the Liberal Party of Canada will only be holding its leadership race sometime in 2013...
Posted by Éric at 12:08:00 PM