PCs move ahead in Ontario

A new poll by Nanos Research released on Saturday shows that the Ontario Progressive Conservatives are leading in provincial voting intentions, the first time Nanos has put the PCs ahead of the Liberals in Ontario since before the October 2011 election. 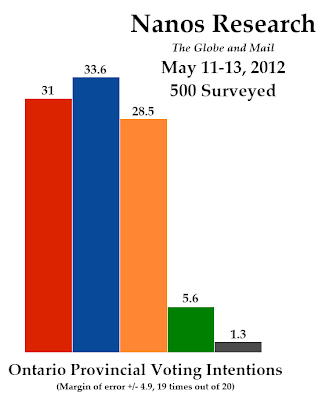 Nanos was last in the field on Apr. 14-15, and since then the PCs have gained 1.5 points to reach 33.6% support. That is a modest gain, but due to the drop of 4.4 points by Dalton McGuinty's Liberals down to 31%, the PCs are leading. The New Democrats are up two points to 28.5%, making this a very tight three-way race.

This is the first time since at least the election campaign that Nanos has been in general agreement with the conclusions of Forum Research, the only other pollster that has been consistently active in Ontario. Forum's poll from May 14 (released a couple of weeks ago) put PC support at 34% to 32% for the NDP and 27% for the Liberals. Though the order of the parties is still different, with the MOE they are all bunched up around 30%. It makes it a bit easier to say with some confidence that, firstly, the three parties are splitting the electorate almost three ways and, secondly, that the PCs are probably ahead.

With these Nanos numbers, the Progressive Conservatives win 43 seats to 37 for the Liberals and 27 for the New Democrats. It is another minority legislature, though one that is far more split than is currently the case. Who would emerge as the government in this scenario is difficult to determine.

Not surprisingly, considering the current fight between the McGuinty government and the Ontario Medical Association, healthcare has moved to the forefront as the top issue in Ontarians' minds: 34% said so, an increase of more than seven points in only a month. Concern about jobs and the economy has dropped 5.5 points to 17%, while the debt and the deficit has dropped by five points to only 7%, putting it behind high taxes and education as a top issue.

But with this conflict over healthcare still up in the air and the three parties running almost even, an election campaign could be incredibly volatile. McGuinty will survive for at least the rest of the year thanks to the support of the NDP, and if he manages to win the Kitchener-Waterloo by-election he could very well survive until 2015. If the PCs manage to hold on to the riding, however, all bets are off come 2013.
Posted by Éric at 8:52:00 AM