A CROP poll released earlier this week by La Presse looking into the views of Quebecers on the student protests also looked at their voting intentions. The result was a significant gain for the Parti Québécois, putting them only a point behind the governing Liberals. 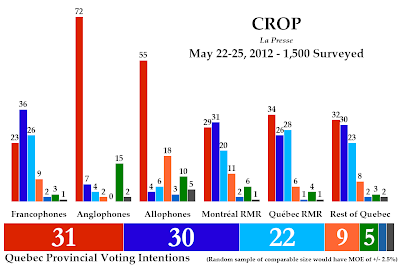 The CAQ is down two points to 22%, while Québec Solidaire is up one to 9%. The Greens, down three to 5%, trail along with Option Nationale, unchanged at 2% support.

This survey puts CROP more in line with what Léger Marketing, Segma Recherche, and Forum Research have concluded. Since mid-April, their polls have not put the gap between the two parties at more than four points, with most showing a gap of two or less. CROP's six point lead in early May, then, was a bit of an outlier. But in the highly charged atmosphere of the protests, it might have been a telling snapshot.

Interestingly, this poll broke down the linguistic groups into francophones, anglophones, and everyone else. Though the sample sizes are smaller for the last two groups, the results show that Québec Solidaire does have some appeal among allophones, scoring 18%. That still puts them well behind the Liberals, who register 55% among this group. Among anglophones, the Liberals lead with 72%.

The PQ also leads in the Montreal region with 31%, a gain of six points. The Liberals are down three to 29% while the CAQ is up one to 20%.

In the rest of Quebec, the Liberals are surprisingly ahead with 32%, a gain of four points. The PQ is up four points to 30%, while the CAQ is down five points to 23%.

This makes for a somewhat unexpected seat result. Because of their traditional lead among francophones, the Parti Québécois can usually turn a tie or close race into a seat plurality or even a majority. In this case, however, with the Liberals ahead in the regions and running very close to the PQ in the Montreal area, the Liberals manage the plurality.

They win 60 seats, three short of a majority, while the PQ wins 49, the CAQ 14, and Québec Solidaire two.

In and around Montreal, the Liberals win 28 seats to 26 for the PQ, two for the CAQ, and two for QS.

In Quebec City, the Liberals win seven seats to three for the CAQ and one for the PQ.

And in the rest of Quebec, the Liberals win 25 seats to 22 for the PQ and nine for the CAQ.

If the Parti Québécois is truly behind in the regions of Quebec, they have no shot at winning the election. The Liberals have a lock on a whole swathe of seats on the island of Montreal, and Quebec City appears to be flipping between the Liberals and the CAQ depending on the poll. The PQ has always been able to run up its numbers outside of the two cities, and if it can't do it in the next election they will be hard-pressed to defeat Jean Charest if the contest continues to be this close.

Their one advantage is that Charest is nearer to his ceiling than is Pauline Marois. CROP asked respondents what their second choice would be, and if we add the first and second choice numbers together we get a good idea of how much growth potential each party has.

After removing the undecideds and "would not votes", the PQ gets a total of 49%, well ahead of the Liberals' 41% "ceiling". That is actually very low for Jean Charest, considering he bested that score in the 2008 election.

But François Legault has the most potential growth. His first and second choice adds up to a grand total of 56% of the electorate. That might give his party some hope, but it is also an indication of how poorly they are doing compared to what they are capable of.

Québec Solidaire's total adds up to 29%, while the Greens manage 15% and Option Nationale 9%.

So, there are still a lot of votes at play. It appears that Jean Charest may have outlasted his welcome for too many Quebecers. His room for growth is small, making it all the more difficult for him to attract new supporters, but he does have the most experience. Marois has less room to maneuver than Legault, though he will be leading a party into an election for the first time. It would seem that these last two leaders have the most to gain (and perhaps to lose) during a campaign, but it might all come down to who manages the five-week gauntlet best.
Posted by Éric at 8:58:00 AM