The NDP wave has already swept across Quebec, and B.C. may be the next province to succumb to the Orange Crush.

The New Democrats have a long history in B.C., having formed the government on several occasions. But the federal NDP has not won B.C. since 1988, when the party took 37 per cent of the vote under Ed Broadbent. Though their lead over the Progressive Conservatives was only two points, it was enough to give the party 19 of the 32 seats in the province.

But let's here take a look at the latest Forum Research poll on the provincial voting intentions of British Columbians. 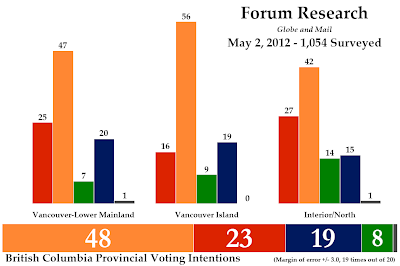 Forum Research was last in the field on Apr. 11, shortly before the two by-election victories by the New Democrats in B.C. Liberal ridings.

Since that poll, the B.C. New Democrats have picked up two points and now lead with 48% support, their highest result in any poll since October 2010.

The B.C. Liberals are unchanged at 23% while the B.C. Conservatives are down four points to 19%. The Greens are steady at 8% support.

The Conservatives did worse than expected in the two by-elections, so this drop in support is not too surprising. But it is significant that even the combined vote of the Liberals and Conservatives (42%) is below that of the New Democrats. In the Apr. 11 poll, the NDP and the Liberals/Conservatives each had 46% support apiece.

The NDP has held relatively steady in Vancouver-Lower Mainland with 47% (+2) and 42% (-1) in the Interior/North. They are up six points on Vancouver Island to 56%.

The Liberals are up two points in Vancouver-Lower Mainland to 25% and seven points in the Interior/North to 27%, but are down six points to 16% on Vancouver Island.

The Conservatives, meanwhile, are down four to 20% in Vancouver-Lower Mainland and nine in the Interior/North to 15%, but are unchanged at 19% on Vancouver Island.

The Forum poll shows that 88% of NDP voters are very or somewhat enthusiastic about casting their ballot for the NDP in the next election, a stellar result. The Liberals, however, register only 70% while the Conservatives muster only 67%. If anything, that means the NDP could be expected to do even better than 48% if an election had been held on May 2. 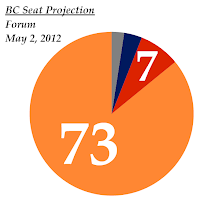 The seat result is, with a 25-point lead, a landslide for the NDP. They win 73 seats out of the 85 in the legislature, with the B.C. Liberals forming a paltry opposition of seven seats. The Conservatives and two independents split the remaining five.

But despite the NDP sweep and horrible numbers for the Liberals, Christy Clark gets a higher approval rating among her voters than either Adrian Dix or John Cummins: 69% to 67% for Dix and 60% for Cummins. Though with so little support, one might expect the Liberals to be down to their diehards.

Take out the "Don't Knows", and Dix has an approval rating of 56% to 34% for Cummins and only 29% for Clark. That shows the real gap between Dix and the other two leaders.

The B.C. Liberals are considering a name change, but it doesn't seem likely that will save them. Only 16% of British Columbians think they should change their name and only 23% of Liberal supporters. Shocking, really, that a change of name isn't a cure-all.
Posted by Éric at 9:31:00 AM