Two polls were released this week showing remarkably consistent results, both giving the Conservatives a narrow lead over the New Democrats. The two polls also show the Liberal Party below its 2011 electoral result, the first time since the weeks after the election that two polls taken over a short period of time have measured Liberal support so low. 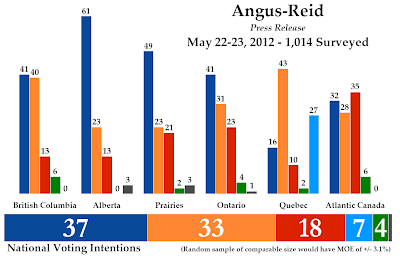 The newer set of numbers, released by Angus-Reid yesterday, put the Conservatives at 37%, unchanged from Angus-Reid's last poll of Mar. 20-21. The New Democrats, however, are up four points to 33%, while the Liberals are down three points to 18%.

This is the first time that Angus-Reid has pegged Liberal support this far down the scale.

The Bloc Québécois is down one point to 7% while the Greens are unchanged at 4%.

Since Angus-Reid was last in the field before the NDP leadership convention, this is another poll where the trends point to what effect Thomas Mulcair has had on voting intentions.

Thomas Mulcair has the highest approval rating of the three main leaders in this poll, with 46%. His disapproval rating is 34%, giving him the only net positive score. Stephen Harper splits 45% to 47% and Bob Rae 34% to 46%. But more importantly for Mulcair, 21% of respondents say their opinion of him has improved in the last month. Though that gives him a "momentum" score of -1 (as the number of people who say their opinion worsened was 22%), that is far better than Rae's score of -8 and Harper's score of -29.

In fact, Angus-Reid's momentum score is often quite pessimistic. Canadians simply don't like their political leaders very much. For Mulcair to have such a relatively benign score is actually a huge improvement over what numbers have usually been registered. 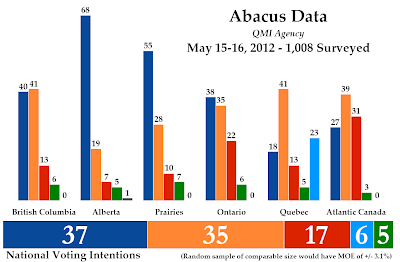 Abacus Data's numbers are about a week older, but show very similar results.

The Conservatives lead with 37%, unchanged from Abacus's last poll of Mar. 9-13, while the New Democrats are up seven points to 35%. The Liberals are down three to 17%.

The Bloc and Greens are each down two points to 6% and 5%, respectively.

The Liberals are second in Atlantic Canada with 31%, up four points, while the Bloc is trailing in Quebec with 23%, a drop of 10 points since mid-March.

Here again, Mulcair is the only leader to have a net positive favourability rating: 36% favourable to 21% unfavourable. Stephen Harper scores 37% to 49%, while Rae scores 22% to 38%. 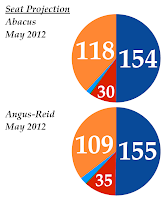 In terms of seats, these two polls deliver similar results. With Abacus's two point Conservative lead, the Tories take 154 seats thanks to good scores out West and in Ontario. The New Democrats win 118, still a big gain over their current crop of MPs, while the Liberals win only 30 seats. The Bloc takes five and the Greens one.

With Angus-Reid's four point Conservative lead, Stephen Harper wins 155 seats to 109 for the NDP, 35 for the Liberals, eight for the Bloc, and one for the Greens.

In both polls, the Conservatives win 19 seats in British Columbia, 27 in Alberta, six in Quebec, and two in the North. Abacus gives them 25 seats in the Prairies, 67 in Ontario, and eight in Atlantic Canada, while Angus-Reid gives them 21, 70, and 10 seats in those regions, respectively.

The New Democrats win one seat in Alberta and one in the North in both polls, with Abacus delivering 15 in British Columbia, three in the Prairies, 31 in Ontario, 57 in Quebec, and 10 in Atlantic Canada. With Angus-Reid's numbers, they win 14, two, 26, 60, and five seats, respectively.

Abacus and Angus-Reid conducted their polling over a relatively similar period of time both this month and back in March, giving us some good data with which to look at the trends. Both surveys were also done online, providing some methodological consistency.

Looking at those trends, we see the Conservatives holding steady nationally and the New Democrats making a big leap forward, particularly at the expense of the Liberals but also the Bloc Québécois. This is the situation in Ontario (leaving out the Bloc, of course), as well as in British Columbia.

In Quebec, we see that the New Democrats made massive gains (10 points with Angus-Reid, 13 with Abacus), which can be attributed to Thomas Mulcair's leadership win. In both polls, the Liberals and Bloc have lost support as a result, while the Conservatives are generally steady. That is not too surprising, as they appear to be stuck with their Quebec base only.

The two polls also show agreement on how the genders feel about the parties. The Conservatives hold an 11 point edge on the NDP in Abacus's polling among men, while the lead is 15 points with Angus-Reid. The New Democrats, meanwhile, have a nine point advantage over the Tories among women in the Abacus poll and an eight point margin in Angus-Reid's polling. That is a stark contrast between the two genders.

In order to definitively pull away from their opponent, then, both the Conservatives and New Democrats need to find a way to appeal to the other sex. The party that manages that feat, without losing the support among the gender among which they currently lead, will be in a very strong position. We often focus on the region vs. region political battle, but this demographic split could be more important.
Posted by Éric at 9:26:00 AM