A three-way race is back in the cards in Quebec, with two polls released today showing no more than seven points separating the third place Coalition Avenir Québec from the leader. Who the leader is, however, is up for debate. 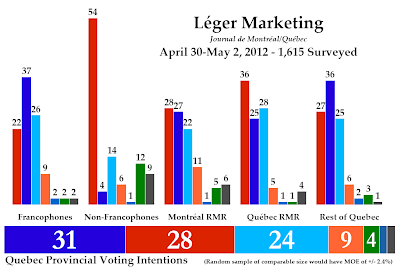 Léger's poll for Le Journal de Montréal, though a few days older, is twice the size of CROP's survey for La Presse. Léger finds the Parti Québécois to be in the lead with 31% support to 28% for the Liberals.

Since Léger's last poll of Apr. 2-4, the PQ has dropped two points while the Liberals have picked up one. The CAQ has picked up two points, and trails in third with 24% support.

The Parti Québécois is leading in this survey with 37% among francophones, down three points. They are also in front in the regions of Quebec with 36% (-1). They have dropped six points in Quebec City to only 25%, however, and are down three points in Montreal to 27%, putting them one point behind the Liberals.

The Liberals are well ahead among non-francophones with 54% and lead in the Montreal region with 28%, a drop of two points. They also have the advantage in Quebec City with 36%, a gain of four points.

According to this survey, 44% of Quebecers want an election this spring and 43% support independence - almost the same percentage of Quebecers supporting the three sovereigntist options. 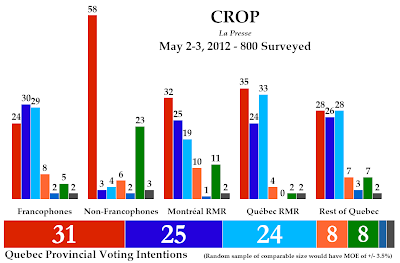 CROP sees something very different going on, however, with the Liberals leading with 31% and the PQ trailing with 25%. That represents a gain of one point for the Liberals since their Apr. 18-23 poll and a loss of three points for the PQ.

Québec Solidaire and the Greens have 8% apiece, while Option Nationale stands at 2%.

The most meaningful difference between this poll and the Léger poll is in the voting intentions of francophones. Léger gives the PQ an 11 point lead over the CAQ and a lead of 15 points over the Liberals. CROP, however, puts the PQ at 30% (-2), only one point up on the CAQ and six points up on the Liberals, who are at 24% (+2). A close race in this demographic means a lot of close races throughout the province.

Non-francophones still opt for the Liberals en masse (58%), but the Greens scored 23% support.

The Liberals lead in Montreal with 32%, down two points, with the PQ at 25% (-1) and the CAQ at 19% (-3). If we look at the more detailed breakdown, however, we see that the Liberal vote is (surprisingly) evenly split between the island (33%) and the outlying parts of the metropolitan area (31%).

The PQ, however, has more support off the island (28%) than they do on it (22%), while the CAQ is doing quite well in the suburban areas with 27%, putting them in a virtual three-way tie with the PQ and the Liberals. At 13%, however, they trail Québec Solidaire on Montreal Island. The party has 16% support there.

This poll indicates that 65% of Quebecers want an election in 2012, with most preferring it to be held in the fall. 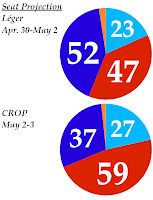 So, some divergent results that point to a volatile electorate. It is difficult to really figure out what is the situation with these two polls, but we're likely looking at the PLQ doing well on the Island and a three-way contest off it, with the Liberals and CAQ battling it out for Quebec City and the PQ holding the advantage outside the two main cities, with the Liberals and CAQ being competitive.

Though the polls point to two different winners, they both point to minority governments.

With Léger's narrow PQ lead over the Liberals, the Parti Québécois squeaks out a minority government with 52 seats, compared to 47 for the Liberals, 23 for the CAQ, and three for Québec Solidaire.

In this case, and thanks to the good Liberal results in the regions and among francophones, they take 22 seats outside the two main cities, with another 32 being won in and around Montreal and five in Quebec City.

Where does the truth lie? If we average out these two seat results, we get 53 for the Liberals, 44.5 for the PQ, 25 for the CAQ, and 2.5 for Québec Solidaire. This would seem to indicate that the Liberals hold the advantage at the moment, but it is too close to really say who is in the lead.

However, Jean Charest and his ministers seem to have been trying to lower expectations about a springtime election. Nevertheless, the rumours continue - particularly because Charest did the same thing just before calling an election in 2008. The numbers aren't bad for the Liberals, and might not get any better, but the student strike throws a big set of unknowns into an election campaign. If the students dog the Premier throughout a five-week campaign, it will make for a lot of ruined photo-ops and the issue won't go away. On the other hand, polls indicate that Quebecers are starting to side with the government more and more (despite thinking they bungled the handling of this issue), so it could be the sort of thing that gives Charest a boost.

Undoubtedly he and his party are weighing the pros and cons. The big problem is that the inquiry into corruption in the construction industry is going to start making news in the fall, and with stories already starting to pop-up (for example, the recent bit of bad headlines for the Education Minister, Line Beauchamp) there is a good chance that the inquiry could be very embarrassing for the Liberals. And as the inquiry should run well into 2013, it will turn Charest's election window into a cul-de-sac.
Posted by Éric at 1:01:00 PM