Last week, two national polls and two federal provincial polls were released indicating that the New Democrats and Conservatives continue to be running almost neck-and-neck in national voting intentions. Perhaps more significantly, however, they show that the gap between the NDP and the Tories has shrunk to between four and zero points in the important battleground province of Ontario. 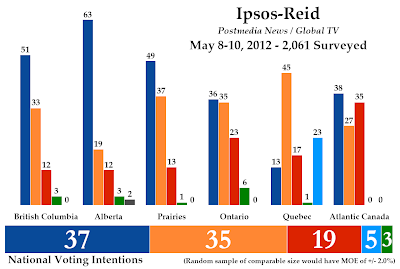 Ipsos-Reid's hybrid telephone/online poll puts the Conservatives ahead with 37% support nationally, with the New Democrats standing at 35%.

Since Ipsos-Reid was last in the field Apr. 3-5, the Conservatives have picked up three points while the NDP has picked up two. The Liberals have dropped two points to 19%, where they stood on election night in May 2011.

The Bloc Québécois stands at 5% support while the Greens are at 3%.

In Ontario, the Conservatives are down five points to 36%, putting them only one point up on the NDP. They have picked up eight points and sit at 35% support, while the Liberals are down four to 23%. This is a horse race. 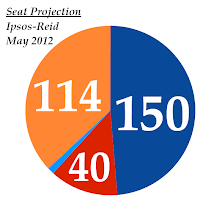 With the results of this poll, the Conservatives win 150 seats to 114 for the New Democrats, 40 for the Liberals, and four for the Bloc Québécois. While the NDP and Liberals could combine to out-vote the Tories, they would be one seat short of an outright majority.

The Conservatives win 27 seats in British Columbia, 27 in Alberta, 19 in the Prairies, 61 in Ontario, three in Quebec, 11 in Atlantic Canada, and two in the North.

The New Democrats win eight seats in British Columbia, one in Alberta, seven in the Prairies, 32 in Ontario, 60 in Quebec, five in Atlantic Canada, and one in the North.

The Liberals win one seat in British Columbia, two in the Prairies, 13 in Ontario, eight in Quebec, and 16 in Atlantic Canada. 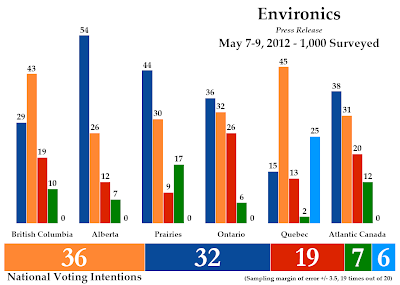 Environics' telephone survey, meanwhile, pegged NDP support at 36%, up four points on the Conservatives. But like the Ipsos-Reid poll, this puts the gap between the NDP and Conservatives within the margin of error. Taking these two polls together, this indicates that the two parties are most likely almost tied.

The firm was last in the field Mar. 6-18, before the NDP's leadership convention. The trends, then, point to what sort of effect Mulcair has had on the party's support levels.

And that means a six-point national gain for the NDP, while the Conservatives are up two. The Liberals have fallen one point to 19%, while the Greens stand at 7% and the Bloc at 6%.

Again, Ontario shows a close race. The Conservatives still lead with 36%, up two points, but the NDP is up six points to 32%. The Liberals are down one to 26%. We are seeing the Tories and NDP vote levels converging while the Liberals fall away.

The Bloc Québécois is second in Quebec with 25% (-5). The Liberals place third or worse in every part of the country.

A note about the Green results in the Prairies and Atlantic Canada: they are implausibly high, but the samples are small and the implications on the results are negligible. 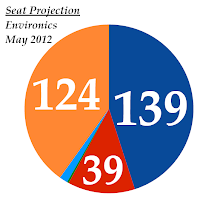 Despite the four point NDP lead, the Conservative advantage in Ontario gives the party the plurality of seats nationwide: 139 seats to 124 for the NDP, 39 for the Liberals, five for the Bloc, and one for the Greens. This time, the NDP and Liberals can combine for a majority.

The Conservatives win 10 seats in British Columbia, 26 in Alberta, 21 in the Prairies, 56 in Ontario, four in Quebec, 21 in Atlantic Canada, and one in the North.

The New Democrats win 20 seats in British Columbia, two in Alberta, seven in the Prairies, 27 in Ontario, 60 in Quebec, seven in Atlantic Canada, and one in the North.

The Liberals win five seats in British Columbia, 23 in Ontario, six in Quebec, four in Atlantic Canada, and one in the North. 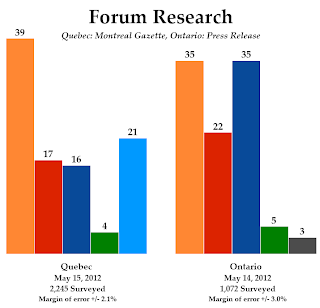 In Ontario, Forum finds the NDP and Conservatives tied with 35%, with the Liberals at 22% and the Greens at 5%. Since their last poll of Apr. 24-25, the NDP is up four points while the Tories are down three and the Liberals six. But despite the neck-and-neck race, the Conservative vote is more efficient and delivers 62 seats to the Tories, with 32 going to the NDP and 12 to the Liberals.

These four polls show how the voting intentions of Canadians may be changing, but also how they are not. The New Democrats are back in front in Quebec in a big way and seem safe in the province under the leadership of Thomas Mulcair. The party is also doing well enough in every other part of the country to be running neck-and-neck with the Conservatives in any given poll. Improving fortunes in Ontario is a big positive for the NDP.

On the other hand, their vote in other regions is looking somewhat shaky. The Conservatives seem to have rebounded somewhat in British Columbia, while the NDP lead in Atlantic Canada is now in question. This is problematic for the New Democrats, as a strong showing in British Columbia is the second plank in any drive for 24 Sussex. Gains in Ontario should be the difference-maker, not the key to an NDP government.

Perhaps that will change and the New Democrats will bank on winning Ontario and Quebec instead of making gains out West. That might be a winning strategy, but it is a big might.

One seat the Conservatives might lose soon is Etobicoke-Centre, due to the results of the 2011 election being thrown out by the courts. If the result is not appealed, or if the appeal is defeated, a by-election will take place. It is difficult to forecast how the voters would react to this re-run (the Conservatives are hoping that they will react negatively against their democratic choice being rejected by a judge, to paraphrase their messaging), but using the projection model the Liberals win the riding by one point with the results of the Ipsos-Reid and Forum polls, and six points with the results of the Environics numbers.

If a by-election does take place in the next six months, it will add a little bit of interest to what might be a rather quiet summer and fall. It will also be a big test. Are voters angry at the Conservatives? Can the Liberals show they are still a party that can win? And is the NDP truly making inroads in Ontario? The polls are currently answering yes, no, and yes to these questions, but the results of a real vote might be more revealing.
Posted by Éric at 1:00:00 PM