Two new polls show that the race in British Columbia is a close one between the federal Conservatives and the New Democrats, while Stephen Harper's party has gained nationwide since late February. 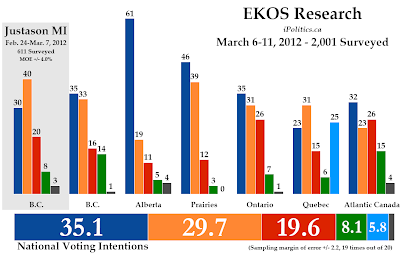 EKOS Research was last in the field for iPolitics.ca between February 21-28, and since then the Conservatives have picked up 3.9 points to lead with 35.1% nationally. The New Democrats are up 0.5 points to 29.7%, while the Liberals are down 2.1 points to only 19.6% support.

EKOS thus joins some of the other recent polls that have put Liberal support back around 20% with the Conservatives in the mid-30s. I suspect the NDP leadership race, which comes to a close this weekend, might change things again.

In British Columbia, the Conservatives are up two points to 35.3%, narrowly edging out the New Democrats. They trail with 33.2%, down 3.3 points. The Liberals are well behind with 16.3% support, down 1.1 points since the end of February. The Greens are doing well here with 14.3%, up 3.3 points.

Justason Market Intelligence also released their latest numbers on the federal scene in the province. Their poll, conducted from February 24 to March 7, so only overlapping with EKOS's survey on March 6 and 7, found the New Democrats leading with 40% support. The Conservatives placed second with 30% while the Liberals were in third with 20%. The Greens brought up the rear with 8%.

Considering the margin of error, these two polls show that the race is very tight in British Columbia. It is clearly a contest between the New Democrats and the Conservatives, who seem to trade the lead with every poll: the NDP has led in seven of the last 15 polls stretching back to December, with the Conservatives leading in the other eight.

British Columbia will be an important battleground in 2015, as its seat allotment increases to 42. If Justason's numbers were repeated on election day, the New Democrats would take 18 of the province's current 36 seats, with 11 going to the Conservatives, six to the Liberals, and one to the Greens. With 42 seats, the NDP could win 21 to the Tories' 13 and the Liberals seven.

For the New Democrats, that means an extra three to nine seats. For the Conservatives, that means maintaining their current number or losing eight B.C. MPs. It might not be earth-shattering, but if it is a close election it could be the difference between a majority and a minority. 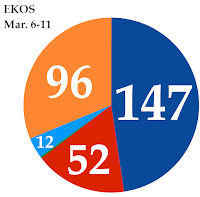 With EKOS's results, the Conservatives win 147 seats on the current 308-seat map, with 96 seats going to the New Democrats, 52 to the Liberals, 12 to the Bloc Québécois, and one to the Greens. The NDP and Liberals could combine for a total of 148 seats, but that is seven short of a majority.

The New Democrats win 13 seats in British Columbia, one in Alberta, 10 in the Prairies, 27 in Ontario, 39 in Quebec, five in Atlantic Canada, and one in the north. They'd likely win 104 seats in the expanded House, their share decreasing from 31.2% to 30.8%.

The Liberals win four seats in British Columbia, two in the Prairies, 25 in Ontario, seven in Quebec, 13 in Atlantic Canada, and one in the north. With a 338-seat House of Commons, the Liberals might win 56 seats, their share decreasing from 16.9% to 16.6%.

The Bloc Québécois wins its 12 seats in Quebec, of course, while the Greens win their one seat in British Columbia.

Using Justason's B.C. results, the national seat total would be 140 Conservatives, 101 NDP, 54 Liberals, 12 BQ, and one Green. This is a significant difference, since the NDP and Liberals could now combine for 155 seats, the bare minimum for a majority. On the 338-map, however, the result would be 157 Conservatives to 110 NDP and 58 Liberals. The combination of NDP and Liberal seats would be short of a majority by one, requiring the Greens to come on board.

This is a nice demonstration of the potential importance of British Columbia in an election that resembles EKOS's forecast. But other things would be at play: those 12 Bloc seats cause more trouble to the NDP than British Columbia's close contest, while maintaining their high support in Ontario and the Prairies would be absolutely necessary. And, in this case, the Conservative result of 22.9% in Quebec puts them in the running to hold on to power, particularly if the party does not do well in a province like British Columbia. Every seat might count.
Posted by Éric at 10:35:00 AM