Two polls that have been released over the last two days show the New Democrats making small gains as the Conservatives tumble by two or three points. They also show that a hypothetical Justin Trudeau-led Liberal Party could be instantly competitive - and that he is the only potential candidate for the leadership that anyone is thinking about. 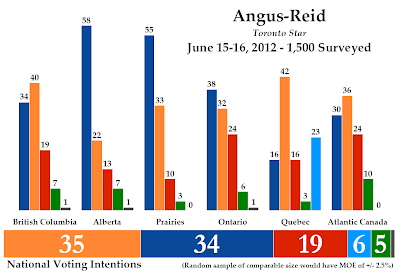 Angus-Reid was last in the field on May 22-23, and since then the New Democrats have picked up two points to lead with 35%. The Conservatives are down three points to 34%, a swing of five points in less than a month.

The Liberals are up one point to 19%, while the Bloc Québécois sits at 6% and the Greens at 5%. 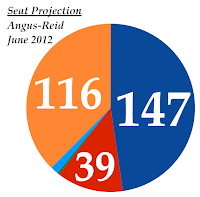 Particularly because of their good numbers in the Prairies and Ontario, the Conservatives come out on top with 147 seats to 116 for the NDP and 39 for the Liberals, with the Bloc winning five seats and the Greens one.

The Conservatives win 15 seats in British Columbia, 27 in Alberta, 21 in the Prairies, 66 in Ontario, five in Quebec, 12 in Atlantic Canada, and one in the North.

The New Democrats win 15 seats in British Columbia, one in Alberta, seven in the Prairies, 25 in Ontario, 58 in Quebec, nine in Atlantic Canada, and one in the North.

The Liberals win five seats in British Columbia, 15 in Ontario, seven in Quebec, 11 in Atlantic Canada, and one in the North.

Angus-Reid measures "momentum", in terms of whether opinion is improving or worsening for each of the leaders. Canadians tend to dislike their politicians, so momentum is usually negative. Thomas Mulcair, however, scored a +2 result, better than Bob Rae's -2 and Stephen Harper's -30. He is also the only leader with a positive approval rating, at 45% to 33%. Rae splits 38% to 44%, Elizabeth May 35% to 37%, and Harper 38% to 53%. 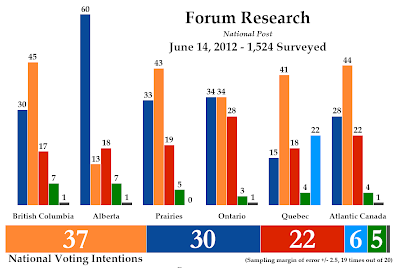 Forum was last in the field on May 23, and since then the New Democrats have picked up one point to lead with 37%. The Conservatives are down two points to 30% while the Liberals are up two to 22%.

In this flash one-day poll, the Bloc has 6% support while the Greens are at 5%.

As this survey and the last one were taken at around the same time as Angus-Reid's last two surveys, we can compare some trends. Federally, both firms have the Tories down (two to three points) and the NDP and Liberals up (one to two points apiece). They also both show consistency in Alberta (Tories and NDP losing support) and Ontario (Tories down, NDP/Liberals up).

Ontario is a tie in Forum's polling, with the NDP (+1) and Tories (-1) at 34% each. The NDP leads with over 40% support in Quebec, the Prairies, Atlantic Canada, and British Columbia, with the Conservatives leading in Alberta only. It is a remarkable set of numbers for the NDP. For a polling firm, however, it is always best to have the least remarkable numbers. Such a large lead has not been recorded elsewhere, though that is not to say that it won't be in the coming weeks. 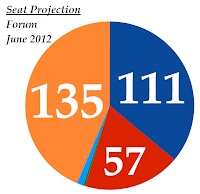 With this poll, the New Democrats easily come out on top in the seat count with 135 to the Conservatives' 111. The Liberals win 57 while the Bloc takes four and the Greens take one.

The New Democrats win 22 seats in British Columbia, one in Alberta, 16 in the Prairies, 27 in Ontario (still their Achilles' heel), 56 in Quebec, 12 in Atlantic Canada, and one in the North.

The Conservatives win nine seats in British Columbia, 27 in Alberta, eight in the Prairies, 50 in Ontario, five in Quebec, 11 in Atlantic Canada, and one in the North.

The Liberals win four seats in British Columbia, four in the Prairies, 29 in Ontario, 10 in Quebec, nine in Atlantic Canada, and one in the North.

On leadership, Forum gives Harper a 31% approval rating, with 61% disapproving. Mulcair scores a net positive rating with 39% to 31%, while Rae has an approval rating of 40% to 32% disapproval. Mulcair is still a bit of an unknown - his "don't know" score sits at 31%, higher than either Rae or Harper. He had 22% "not sure" in Angus-Reid's poll, also higher than Harper or Rae.

But Bob Rae is on his way out. Who will replace him? Justin Trudeau is the only plausible candidate with any real support/name recognition, registering 23% in Forum's poll on who is the best person for the job, 16 points ahead of the next favourite option (John Manley). Trudeau also had the best "good choice" score in Angus-Reid's poll.

Interestingly, both surveys asked how Canadians would vote if Trudeau was Liberal leader. Obviously, the difference between hypothetical and reality is something François Legault could tell us a lot about. Nevertheless, it is indicative of Trudeau's popularity.

Forum had the most modest score for a Trudeau-led Liberal Party, with 28% support to 28% for the Tories and 32% for the NDP. Based on their regional breakdown, this would deliver 86 seats to the Liberals, putting them not far behind the Conservatives (at 106 seats) and the NDP (at 113). The Trudeau Liberals would win 23 seats in Quebec and 36 in Ontario.

Angus-Reid provided no regional breakdown so there is no way to run a seat projection, but they did give the Trudeau Liberals a massive 40% score. This shoved the NDP down to 21% and the Conservatives down to 30%, a certain majority for the Liberals. Perhaps more interestingly, though, they compared Trudeau's numbers to those of other potential leaders. Of those listed, Dominic Leblanc performed the worst (35% CPC to 31% NDP and 20% LPC). Marc Garneau, seen as a likely candidate, managed 28% to 27% for the NDP and 32% for the Tories.

The numbers are odd, though, since they all resulted in the NDP losing support whether or not the Liberals gained any. Why would the Leblanc Liberals manage to drop the NDP by four points while only taking one for themselves?

Until the Liberal leadership race actually gets underway and we know whether or not Justin Trudeau runs, these numbers do not tell us much. They do show, however, that the Canadian public likes the idea of a Trudeau-led Liberal Party. In politics, merely getting your foot in the door is half the battle. It points to potential for the Liberals if all of their cards are played right and Trudeau turns out to be what some Canadians hope he can be. Those are big ifs, but considering the 2011 debacle a "maybe" is not a bad thing for the Liberals.
Posted by Éric at 12:47:00 PM