Last week, Environics released a new survey showing the New Democrats holding a four-point lead over the Conservatives. The numbers in the poll were particularly striking in Ontario, where the NDP was also pegged with the advantage. 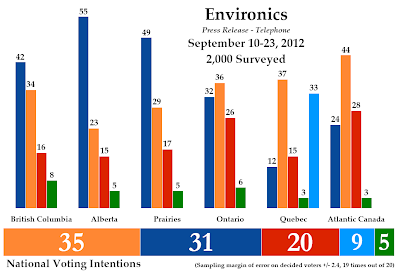 Environics was last in the field Jun. 12-23, and since then the New Democrats held steady with 35% support. The Conservatives were down two points to 31% while the Liberals were up one point to 20% in the poll.

The Bloc Québécois was up two points to 9% while the Greens were down one to 5%.

It is worth noting that shortly after the Environics poll was released another poll emerged from Forum Research that gave the Tories a four-point advantage. I will take a closer look at that poll tomorrow, but it is already included in the weighted federal poll averages at the top of this page.

The most significant shifts took place in Ontario, where the NDP gained six points to top the table at 36%. The Conservatives fell eight points to 32%, while the Liberals were at 26%. This is a rather spectacular result for the New Democrats, who have struggled in Ontario of late. This result from Environics could be a bit of an outlier in that regard. But with the provincial scene in flux, it could very well be that the federal one is as well.

In Quebec, the New Democrats fell seven points to 37% while the Bloc was up by that amount to close to within four points with 33%. This sort of result has been replicated in several recent polls, suggesting that the PQ's provincial victory may be rubbing off on the Bloc. If that is the case, we should probably expect the Bloc's support to dip in coming weeks.

The Conservatives led in Alberta with 55%, while the New Democrats trailed at 23%. The Liberals gained seven points to hit 15% in the province.

The New Democrats led in Atlantic Canada with 44%, while the Conservatives were given the advantage in the Prairies with 49% and British Columbia with 42%. 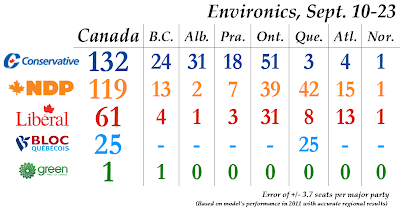 Despite the four-point NDP lead, the Conservatives still would win a plurality of seats with 132 on the proposed boundaries of the new 338-seat map. The New Democrats win 119, the Liberals 61, the Bloc Québécois 25, and the Greens one.

The reason is simple: the NDP's vote in Ontario is not efficient enough to make up for the loss of (potential) gains in British Columbia and the Prairies, where the NDP has usually been doing better in the polls. And losing out on so many seats in Quebec to the Bloc makes a huge difference. The new boundaries also disadvantage the NDP somewhat (particularly due to the extra seats in B.C. and Alberta) - on the current boundaries the Tories would take 121 seats to the NDP's 114.

But with the NDP and Liberals being able to combine for 180 seats on the expanded map (and 169 on the current one), the Conservatives would be unlikely to hold on to power for much longer.

Despite a less-than-advantageous regional breakdown, this is a good poll for the New Democrats. They need to make inroads in Ontario in order to win the next election, but they also need to hold on to their vote in Quebec and make small (but seemingly easier) gains in the West. If the Tories are losing support in Ontario but re-gaining the advantage in B.C. and the Prairies, the party could be returning to its traditional base, one that is good enough to win an election but not enough to win a majority.
Posted by Éric at 9:44:00 AM