February was a brisk month for federal polling, with four national polls, two Quebec polls, and one Ontario poll being conducted throughout the month and surveying 12,497 Canadians. The result was a big decrease in Conservative support, primarily to the benefit of the Liberal Party. 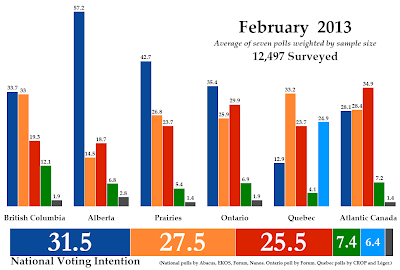 The Conservatives averaged 31.5% in February, down 3.6 points from what they managed throughout the month of January. That is a sharp decrease for the party, and the first poll of March does not suggest that things are getting any better.

The New Democrats were down 1.7 points to 27.5%, their lowest result since February 2012 (before Thomas Mulcair became leader). They have been on a general decline since June.

The Liberals averaged 25.5%, up 2.1 points since January, while the Greens were up 2.2 points to 7.4% and the Bloc Québécois increased by 0.4 points to 6.4%. Support for other parties and independents stood at 2.1% in February.

If we compare the results of these polls from Abacus, EKOS, Forum, and Nanos to the last time all four were in the field in a 30-day period, we see that the shift in support has been relatively small.

Without weighing the polls by sample size, we see that the average of 32% in the February polling for the Tories is down 1.2 points from November/December, when they averaged 33.2% in polls by these four firms. The NDP is down slightly as well, while the Liberals are up a tick.

In Atlantic Canada, the Liberals led for the fifth consecutive month but dropped 2.4 points to 34.9%. The NDP, which has tumbled sharply from 40% in September, was down 0.5 points from January to 28.4%. The Conservatives were down three points to 28.1%, but have been generally stable since April. The Greens were up 4.8 points to 7.2%.

The Conservatives slipped 5.1 points to 42.7% in the Prairies, while the New Democrats were down 0.8 points to 26.8%. That is their worst showing since September 2011, and over the last four months they have been down considerably from where they were between October 2011 and September 2012. The Liberals hit their highest level of support since August 2010 with 23.7%, a gain of 6.5 points. The Greens were down a point to 5.4%.

Thanks to the updated figures at Pollmaps.ca, I am able to make projections with the proposed boundaries as they currently stand, including the latest changes to the map in Ontario and Quebec. 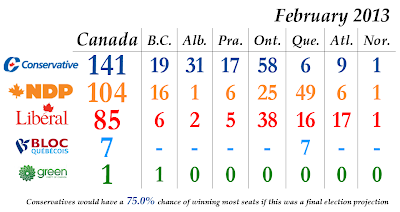 The Conservatives dropped 20 seats from January's projection, and would win 141 with these numbers. The New Democrats pick up five seats and win 104, while the Liberals gain 17 and take 85.

The Bloc wins seven seats while the Greens win one.

The results do show how the new boundaries open up the west to a little more competition, with the New Democrats able to win seats in Saskatchewan and the Liberals (who are up considerably in Alberta) competitive in Calgary and Edmonton. The new boundaries do not benefit the Conservatives much considering how far they've fallen in Ontario, while the NDP is able to hold on to the lion's share of seats in Quebec.

The landscape is getting tighter, as the Conservatives slip and the Liberals gain. The last set of polls, including the most recent one from Forum, have been very consistent. They put the Conservatives at 32% or lower, the NDP at around 27%, and the Liberals closer to 30%. The numbers are a little too consistent - and February's averages are in line with them - to shrug off.

The Tories are in a bit of trouble, as they have dropped a great deal and particularly in provinces where they need to be doing better: Ontario and British Columbia. The NDP is making it difficult for the Conservatives in B.C. while the Liberals are doing much better in Ontario.

Of course, the Conservatives have been here before: the monthly averages chart shows just how weak the Conservative numbers were throughout 2010. But the party will only get up from the floor so many times before they stay down. The stars may be aligning for a comeback to be more unlikely than it was in the past: a confident Official Opposition with strong bases of support, a wildcard in Justin Trudeau at the helm of the Liberals, and the years in government starting to pile up.
Posted by Éric at 12:01:00 PM