For the past few weeks, I have been doing updates to the site on Fridays, taking care of any new polls that need to be added to the By-Election Barometer and updating the Liberal leadership endorsement rankings. I haven't posted about it on the front page, but going forward I will change that and use Fridays to quickly go over some of the polls and topics I haven't had a chance to tackle throughout the week, as well as shed some light on the updates to the other parts of the site.

This week's Friday update includes a look at the latest poll from Quebec, the endorsement rankings for this weekend's Quebec Liberal Party leadership convention, and updates for the by-elections in Kent and Labrador.

A new poll by Léger Marketing released earlier this week via Le Journal de Montréal showed that the Parti Québécois held the narrowest of leads over the Liberals, with 31% to 30% support. The Coalition Avenir du Québec trailed with 20%, while Québec Solidaire (9%), the provincial Greens (5%), and Option Nationale (4%) brought up the rear.

The poll also included some details on the PLQ leadership race. Philippe Couillard remained the favourite of the three candidates, and the only one who could apparently keep the Liberals competitive with the PQ.

I wrote about the poll for The Huffington Post Canada. You can read that article here.

The Léger poll showed very little change from their last survey from early February: the PQ remained in front among francophones and in the regions of Quebec, while the Liberals had the advantage among non-francophones, in and around Montreal, and in Quebec City. 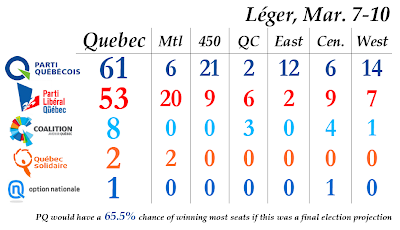 With the results of the Léger poll, the Parti Québécois would increase its seat total from 54 to 61, putting them just short of a majority government. The Liberals would win 53 seats, up from 50, while the CAQ would drop from 19 to only eight. Québec Solidaire would take two seats and Option Nationale would win one.

Note that the seat for Option Nationale is Jean-Martin Aussant's in central Quebec. Aussant has already announced he plans to run in a Montreal riding in the next election. Until he identifies that riding, the model will continue to assume he'll run in Nicolet-Bécancour, and whether he wins it or not in the model will be a proxy for a hypothetical Montreal run. But that means the CAQ wins one fewer seat than they might otherwise win - or does it? If Aussant runs in Montreal, it will probably be a riding already held by the PQ. If he wins it, that means one fewer seat for the PQ but then it opens up Nicolet-Bécancour to that party. They held it before Aussant left to form his own party, and the CAQ did not win it by a wide margin in September. In the end, it probably evens out.

With these seat numbers, you might see the ingredients for a sovereigntist majority. The PQ could combine with QS and ON for a total of 64 seats, enough to have an outright majority and a friendly Speaker. But it might not be so simple - the PQ campaigned on the left but so far has governed in the centre. In fact, the most critical voices in the National Assembly often come from the two Québec Solidaire MNAs. Pauline Marois would have to swing quite strongly to the left to get both smaller sovereigntist parties on their side. That could be easier than currying favour with the Liberals or CAQ, but it is difficult to envision a coalition government.

One last thing to note before moving on: François Legault wrote on Twitter that the reason his party has scored so low in Léger's last two polls (both put his party at 20%) while doing better in CROP's surveys (27% in their last two polls) is because Léger does not include the names of the party leaders anymore, as CROP still does. According to Léger, that is because the Liberals only have an interim leader.

Legault argues that this is the cause of the lower numbers, as his party is not as well known as he is. He might have a point - but on the other hand, the mention of Jean-Marc Fournier (interim leader of the PLQ) might unnaturally depress his party's numbers. And the names of the party leaders are not present on ballots (unless your name is Mario Dumont). Legault is probably right about why Léger's results for the CAQ have been lower than CROP's. But that doesn't necessarily mean that CROP is the more accurate of the two.

Couillard favoured in the endorsement rankings

The Liberals will be choosing their new leader this weekend, and the safe money is on Philippe Couillard. But the Liberals are holding an old fashioned delegated convention, so anything can happen. The most likely outcome is a win by Couillard or Raymond Bachand. The endorsement rankings system agrees. 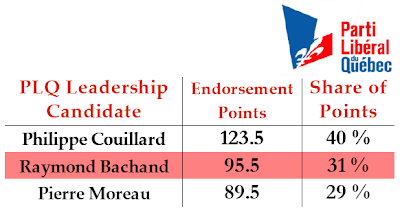 By adapting the system for the provincial level (treating MNAs as MPs), Couillard ends up on top with 40% of the endorsement points. The PLQ caucus is almost evenly split between the three candidates, but Couillard has some of the bigger names in caucus (Yves Bolduc, Sam Hamad, Gerry Sklavounos, Marc Tanguay, Kathleen Weil, among others) and a few long-time veterans (Henri-François Gautrin, Yvon Marcoux). In addition, he has more support from former MNAs, including Norman MacMillan and Benoît Pelletier, than his rivals. That gives him the edge in the endorsement rankings, but puts a first ballot victory out of range.

Bachand comes in second with 31% of the endorsement points. His caucus support is smaller than Couillard's but it is slightly more experienced (they have won an average of 3.1 elections, compared to 2.8 for Couillard). He has the support of three strong women in the caucus in Marguerite Blais, Christine St-Pierre, and Lise Thériault, but not enough support among former MNAs.

Pierre Moreau brings up the rear with 29% of the endorsement points. He has more caucus support than Bachand, but his supporters are the least experienced (they have won an average of 2.5 elections). He has virtually no support among former MNAs, at least according to the endorsement information that is available here and on their respective websites (Moreau's is very bare bones).

I think the endorsement rankings are a very plausible first ballot result, though I suspect Moreau will not do as well and Bachand might end up closer to Couillard. This seems to be the general consensus in terms of the order of the candidates, but if the result is very similar to this then Couillard could be in trouble. A lot of Moreau's supporters might be expected to go with Bachand, so if Couillard does not end up closer to the 50% mark he could be overtaken by Bachand on the second ballot. It isn't an outcome that would be very shocking, though the party would probably be better off with Couillard (if the polls are right, at least).

The forecast for the New Brunswick provincial by-election in Kent remains 'Strong Liberal', thanks to the poll from earlier this week that put the Liberals under Brian Gallant ahead of the Progressive Conservatives.

Peter Penashue's resignation due to improper spending practices in the last federal election came as a bit of a surprise. As the election was decided by only 79 votes, it makes Labrador a seat that the Conservatives may have difficulty holding on to. 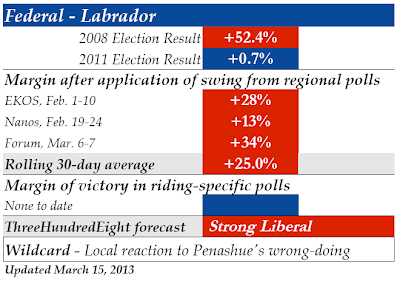 The by-election forecasting model thinks that the Liberals will easily win the riding back. It is a traditionally Liberal riding after all, as Penashue was the first Conservative to win it since Ambrose Peddle in 1968 (and that was for only one term).

The Conservatives have tanked in Atlantic Canada while the Liberals have improved considerably, making Labrador a riding that should swing. But it is a riding with a small population and, due to its geography and history, is hyper-local.

Will that play in Penashue's favour or not? How has the local population reacted to his resignation and the reasons behind it? The by-election will let us know. And who will run for the Liberals? Will Todd Russell win the nomination or will it by Yvonne Jones, who has stated she intends to run? She was formerly the leader of the NL Liberal Party, and the model considers her a "star" candidate. Both Russell and Jones bring a virtual incumbency effect of their own, making this one a tough fight for the Conservatives.

Unless Labradorians react strongly against Penashue, I imagine that the margin will be a lot closer than the 25 points from the rolling average. But one has to consider the Liberals the heavy favourites.
Posted by Éric at 10:05:00 AM