The probability that the B.C. Liberals will be able to overcome the now 19.5-point gap that separates them from the B.C. New Democrats by May 14 has fallen to less than 1 in 50. Even a seasoned pollster like Mario Canseco of Angus-Reid, with memories of Alberta still lingering, says a comeback at this point "would be impossible." He is almost certainly right.

Crazier things have happened, of course. But barring some unforeseen and catastrophic event that cripples the New Democrats in the next seven weeks, there is little hope for the B.C. Liberals in the upcoming election. At least in terms of winning it outright.

That doesn't mean that the party should give-up - as that article by the Globe and Mail's Ian Bailey points out, there will be life after the May 14 election for the Liberals who manage to get re-elected or elected for the first time. For one thing, there might be a party to rebuild.

Despite their chances of re-election dropping to a new low in ThreeHundredEight's forecast, the B.C. Liberals still command the support of almost one-in-three British Columbians. They have dropped 1.6 points in the projection from where they stood as of the polls running to Mar. 12, and now stand at 30.4% (or between 28.2% and 32.6%). The New Democrats slipped only slightly, by 0.5 points to 49.9% (or 47.5% to 52.3%).

That widened the margin by 1.1 points, costing the Liberals a single seat in the projection. They are now projected to win 20 to 64 for the New Democrats (and one independent). But the projection ranges have moved more significantly: from 48 to 75 seats the New Democrats are now projected to win between 53 and 75. The Liberals have dropped from a projected high of 37 seats to only 30, putting them in range of winning between eight and 30 seats.

The B.C. Conservatives picked up 0.8 points to reach 10.4% support, while the Greens are up 1.2 points to 7.5%, thanks in large part to a much stronger result in Angus-Reid's latest poll for the party on Vancouver Island.

That is where the biggest change in support occurred, with the Liberals falling 4.4 points to 25.1%. The Greens picked up the slack, gaining 3.4 points to reach 11.4%. The NDP is unchanged at 55.4%, and are poised to sweep the island.

In metropolitan Vancouver, the New Democrats decreased by a minuscule 0.1 point to 51.3%, but due to the 0.9-point drop for the Liberals picked up a seat in the region. The Conservatives are up 0.9 points to 9.4% support.

In the Interior and North, the New Democrats and Liberals both dropped by 0.9 and 1.6 points, respectively, to 42.9% and 32%. There was no change in seats, but the projected high for the Liberals fell from 19 to 15 seats in the region. The Conservatives gained 1.6 points to reach 15.3% in their best part of the province. 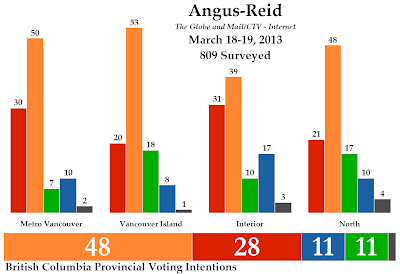 I wrote about this new Angus-Reid poll for The Huffington Post Canada here, so I won't go into too much detail about it. All of the changes in support from Angus-Reid's Feb. 21-22 poll do not seem statistically significant, but the Liberals certainly can't afford to be slipping (by three points, in this case) at this stage of the race.

Notably large changes, however, include a drop of five points for Christy Clark on the question of who would make the best premier (Adrian Dix scored 31% to Clark's 16%), and the seven-point increase in Clark's disapproval rating, to 65%. Her net score is now -38, compared to +8 for Dix. And 58% of respondents said their opinion of Clark had worsened over the preceding three months. Only 5% said their opinion had improved, compared to 20% who said the same about Dix.

In short, there is no good news for the B.C. Liberals in this poll. They trail among men and women and among the oldest British Columbians, along with younger voters. Clark is bested by Dix on every issue that was asked in the poll, including on the economy and health care, the two most important issues in B.C. Her approval rating is getting worse while Dix's is getting better. There is no silver lining here. When the Ontario Liberals made a (much more modest) comeback against the PCs in 2011, they did so on better personal numbers for Dalton McGuinty than Tim Hudak's. That was the advantage that they had going into the election - and leadership is an absolutely vital one. Here, the NDP has the edge on that question. If the Liberals have a way-out in mind, what is it?
Posted by Éric at 9:19:00 AM