The B.C. New Democrats have moved above 50% support in British Columbia for the first time in the projection, thanks to a new poll from Ipsos-Reid that gave the NDP 51% support province-wide. The party is now forecast to have a 97.7% chance of winning the popular vote on election night and, if the election were held today, a 97.6% chance of winning the most seats.

Since the last projection of Feb. 25, which incorporated all polls in the field up to Feb. 22, the New Democrats have picked up 2.8 points and now lead with 50.4%. The B.C. Liberals increased by 0.8 points to 32%, but dropped one seat to 21. The NDP picked up that seat and are projected to win 63, though the ranges for both parties have widened to 48-75 for the NDP and 8-37 for the Liberals. That puts the New Democrats very safely in majority territory.

The New Democrats improved their position in Metro Vancouver, increasing by four points to 51.4%, while the Liberals were down 1.1 points to 32.5%. The two parties swapped three seats, with the NDP now up to 28 in the region and the Liberals down to 11. Both parties gained on Vancouver Island, however, with the NDP up 2.7 points to 55.4% and the Liberals up 4.3 points to 29.5%. The Greens, who did poorly in Ipsos-Reid's poll, slipped 6.2 points to only 8% on the island (though their range puts them as high as 11.5%).

In the Interior and North, the New Democrats dropped by 0.4 points to 43.8% while the Liberals increased by 2.2 points to 33.6%. The Liberals took two seats from the NDP in the projection in the process. This remains the one region of British Columbia while the Liberals have the greatest chances of salvaging things - that was made easier by a 1.2-point drop by the Conservatives to 13.7%. 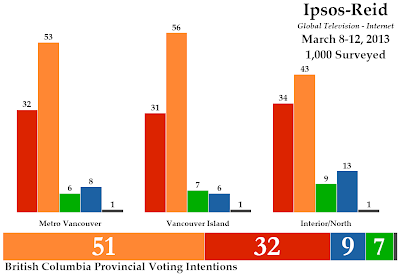 Ipsos-Reid has not been in the field since Nov. 26-30, and much has happened in the intervening four months. Nevertheless, the changes in support were within the margin of error (or would be with a random sample): the NDP gained three points, while the Liberals dropped three points to 32%.

The Conservatives and Greens were unchanged at 9% and 7%, respectively. Support for independents and other parties was only 1%, also unchanged from November.

The New Democrats held an eight-point edge over the Liberals among men - and 29 points among women. The NDP was also ahead, by a margin of 51% to 33%, among British Columbians over the age of 55.

But the poll did have some rare good news for Clark. While Dix beat Clark by wide margins on who was best able to protect the environment and deliver programs and services to British Columbians, Clark was narrowly ahead on the questions of economic management (40% to 32%), creating jobs (38% to 33%), and managing the province's finances (38% to 34%). The silver lining for Dix is that among older British Columbians (i.e., those who vote in the largest numbers) the margin was far narrower on managing the economy and creating jobs, and he scored better than Clark on financial management.

So, the theme of the economy remains a potentially strong one for Clark. But her advantage is still quite small. Dix did much better on being able to deliver programs and services (54% to 24%), which is significant considering that 24% of British Columbians said that health care was the top issue (more than any other issue), and that 10% identified ethics and accountability as most important. Nevertheless, the economy (21%) and the deficit/budget (10%) scored highly as well.

But if the economy was the only vote-deciding issue, and with the upcoming election now front and centre in provincial news, Clark's Liberals would be doing a lot better. Their time might simply be up.
Posted by Éric at 1:19:00 PM