Three provincial by-elections will be taking place within the next six months in Ontario and New Brunswick. The Liberals should easily hold on to one and lose the other, while the third race could be a tight three-way contest.

We'll start with the seemingly most foregone conclusion, the by-election in Kent that will be brought upon by the departure of Shawn Graham. The former leader of the New Brunswick Liberals won the riding in the 2010 election easily, with 56% of the vote to 26% for the Progressive Conservative candidate, Bruce Hickey. The riding is reliably Liberal, having been held by the Graham family for almost 40 years. Brian Gallant, Graham's replacement as leader of the NB Liberals, has announced he will be running in order to get himself into the legislature.

The odds are very strong that Gallant will easily win. The early numbers show that Gallant was a popular choice for leader, as his party was tied with the governing PCs in the last survey from the Corporate Research Associates. That suggests that Gallant is capable of winning the riding by as large of a margin as Graham did in 2010.

Had Dominic Cardy, leader of the New Democrats in the province, put his name forward there might have been a race. Cardy made what should have been an easy romp for the Tories in Rothesay a close race. It doesn't seem like he will be running, so the only thing that could trip Gallant up is if either Cardy or the Tories put up a stellar, unbeatable candidate. That seems highly improbable, making Kent a Strong Liberal forecast.

The by-election in Windsor-Tecumseh is not quite as predictable as the one in Kent, but it looks like the Ontario New Democrats are in a very strong position to win the riding from the Liberals following the resignation of Finance Minister Dwight Duncan. 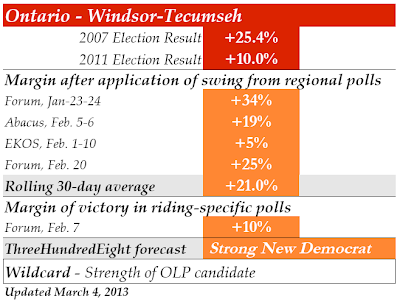 Duncan has won Windsor-Tecumseh and its predecessor ridings by large margins in the past, though that shrank to only 10 points in the 2011 election. With the Liberal vote having continued to plummet province-wide, and especially in southwestern Ontario, the New Democrats should be able to wrest the riding away.

In fact, the last month of polls show that the NDP could win by as many as 19 points or more. The only riding-specific poll released so far, by Forum Research, gave the New Democrats 42% of the vote to 32% for the Liberals on a generic ballot. The Tories finished third with 19% (the poll was conducted Feb. 7 and surveyed 403 residents of Windsor-Tecumseh).

The poll shows that a candidate like Sandra Pupatello, on the other hand, could retain the riding for the Liberals. Pupatello won't be running, but that doesn't mean the Liberals won't be able to find someone of similar calibre to carry the party banner. They will need to if they want to win the riding, because it seems to be their only chance. Unless they do, the New Democrats will win Windsor-Tecumseh.

The likely winner of the by-election in London West, however, is impossible to predict at this early stage. 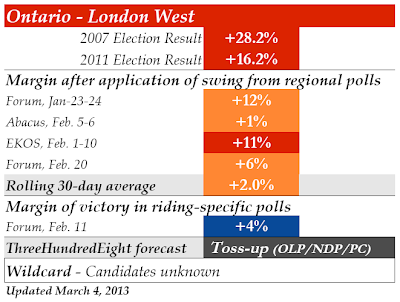 Brought about by the resignation of former Energy Minister Chris Bentley, London West could be a real three-way race - even more so than Kitchener-Waterloo was pegged to be (though it turned out to be not so much of a close contest in the end).

Bentley won the riding for the Liberals over the last three elections, winning majorities twice and still winning by 16 points in the last election. Before Bentley, the riding voted PC during the Harris years. It is possible it could go that way again.

The Liberals have the advantage of incumbency, and with the candidates so far unknown it is difficult to handicap the race. They get a slight edge in the forecasting model, with a 42% chance of retaining the riding. The New Democrats are the next most likely to win at this stage, with a 33% chance. The swing in the region gives them the edge in three of the last four polls, with the Liberals being projected ahead in the fourth.

More significant could be the riding poll by Forum Research (Feb. 11, 724 surveyed) which gave the Progressive Conservatives 34% of the vote to 30% for the Liberals and 28% for the New Democrats. The model gives the Tories a 24% chance of winning.

When you consider that the Tories are favoured in the only poll in the riding, the New Democrats are favoured based on regional trends, and the Liberals have the incumbency advantage and a decent showing in one of the last four regional polls, this is a true toss-up. The OLP is slightly more likely to win than either the NDP or the PCs, but the difference is marginal. Until the candidates become known, we won't have a good idea of where London West will go - and even then we might not.