If the B.C. Liberals read The Globe and Mail, they will be pretty depressed this morning. Not one, not two, but three articles are on the website detailing just how bad things are for the B.C. Liberals and their hopes for re-election. One of them is mine.

The article answers the question of whether the polls in British Columbia really do tighten up as an election approaches, a claim I've seen several times when people have been trying to make sense of the numbers. My article shows that they are indeed right, but that even that tendency provides little succor for the B.C. Liberals. They are just too far back.

Read the article to get the full explanation. But Ipsos-Reid put the gap between the two parties at 19 points last week, while Angus-Reid puts it at 20 points today (my article was filed before Angus-Reid's poll was published, but it doesn't change anything in the analysis - in fact, it makes it worse for the B.C. Liberals). The current projection, not taking into account Angus-Reid's poll, puts the gap at 18.4 points.

How often has the difference between the margin in a poll and the margin on election night been larger than 18.4 points with, say, 75 days left before the election (Angus-Reid's poll was in the field with 56 days to go)? Not once, at least since 1996. My records of 30 polls taken within 75 days of a B.C. election in the last four campaigns have never shown a narrowing of the gap of more than 18 points, a bar that was reached in only one of the 30 polls. The next largest tightening was 14 points.

That doesn't mean the B.C. Liberals are cooked, as records are made to be broken. But the ingredients for a historic comeback just don't look to be in the cards. 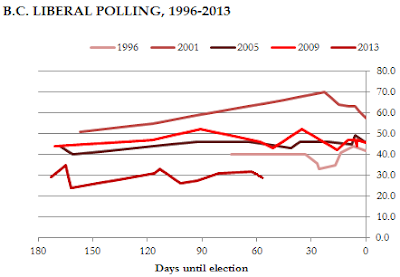 As you can see, the B.C. Liberals are currently polling worse in the run up to the 2013 election than they have in the previous four elections. Their support in 1996, 2005, and 2009 was relatively similar, and did not move too much during the campaign, while their support in 2001 was quite high. But their current bout of polling has been consistently below where they were in pre-campaign periods over the last 17 years. That is not a good sign for them. 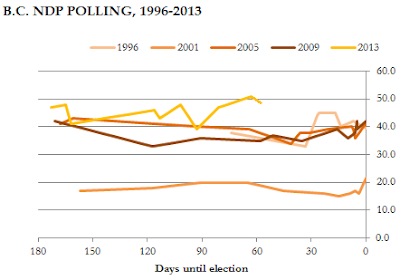 By the same token, things have never been better for the New Democrats. Just like the B.C. Liberals, their support in 1996, 2005, and 2009 was generally the same. The election in 2001 was particularly bad for the NDP, but their current polling is better than it ever was in previous elections stretching back to 1996.

Note as well how the polls have tended to under-estimate NDP support (the lines at the y-axis are reaching up to the election result). That is another good indicator for the New Democrats, as the B.C. Liberals have tended to be over-estimated. If that happens again, the Liberals could find themselves on the lower edge of this site's projection ranges, and the NDP on the higher end.

Nothing is set in stone in politics, however. The federal New Democrats were not poised to replace the Bloc Québécois in Quebec in the run-up to the 2011 election, either. Some horrific scandal could hit the NDP or Christy Clark could run into a burning house and save a baby's life. If the B.C. Liberals do comeback to win this election it will be a rather exceptional political event. It could happen - but it just isn't likely at this point.