PCs drop as OLP moves into tie for lead

A poll from Forum Research was released by the Toronto Star this morning, showing the Liberals and Progressive Conservatives neck-and-neck in Ontario's provincial voting intentions. Forum reports this would be enough to give the OLP another minority. But it does not seem that it would be nearly as comfortable as is suggested. 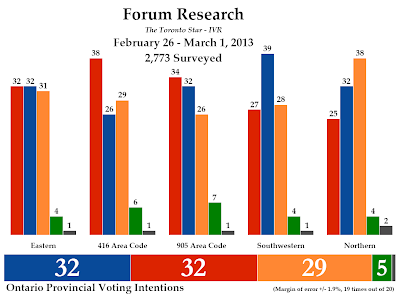 Forum was last in the field at the provincial level less than two weeks ago, on Feb. 20. The Progressive Conservatives fell four points since that last poll, dropping to 32%. That put them in a tie with the Liberals, up three points. The New Democrats were up one point to 29%, while the Greens were unchanged at 5% support.

Only the drop by the Tories is outside the margin of error, though the Liberal increase is pushing statistical significance.

These are, relatively speaking, good numbers for the Liberals. They haven't scored so highly in a Forum poll since February 2012. And the demographic breakdown suggests the OLP has an advantage: they led the Tories by three points among Ontarians between the ages of 55 and 64, and by seven points among those 65 or older.

This IVR poll report comes with the same criticisms I've mentioned before: a lack of unweighted sample sizes, primarily. But Forum is hardly in rare company there, unfortunately.

At the regional level, the Liberals led in Toronto with 38% to 29% for the NDP and 26% for the Tories, while the party was also ahead in the 905 area code with 34% to 32% for the PCs and 26% for the NDP. That represented an 11 point drop for the Progressive Conservatives in this region, eight of which went to the Liberals. In fact, this is the first time that the OLP has been ahead of the PCs in the 905 in Forum's polling since, again, February 2012.

The PCs and Liberals were tied in eastern Ontario with 32% apiece, while the NDP was just behind at 31%.  The Tories were ahead in southwestern Ontario, however, with 39% to 28% for the NDP and 27% for the Liberals.

The New Democrats were in front only in northern Ontario, picking up 12 points to reach 38%. The PCs trailed with 32%, while the Liberals were third with 25%.

Contrary to Forum's seat breakdown, which inexplicably gives the New Democrats only one more seat than they won in 2011 despite gaining seven points and trailing the leaders by only three, ThreeHundredEight's regional model paints a much closer race.

The Liberals would narrowly edge out the Tories and win 41 seats, 28 of them in and around Toronto and another seven in eastern Ontario. The PCs win 37 seats, 27 of them in the eastern, northern, and southwestern corners of the province, while the New Democrats win 29 (almost half in the Golden Horseshoe). If this were the final projection of an election campaign, the OLP would have a 61.9% chance of winning the most seats - little better than a coin flip.

Kathleen Wynne's numbers remain rather good, at 34% approval to 32% disapproval (the gap shrank by four points, but it could be a statistical wobble). Fully 70% of OLP voters approve of her, putting her near Andrea Horwath's 75% approval rating among NDP supporters.

Apparently despite himself, Hudak is still in the race because of the solidity of the Progressive Conservative base in Ontario. The Liberals are very much back in the game and have a decent shot at another minority, but the New Democrats will complicate matters considerably. Horwath still has the best personal numbers, and has put her party close enough to the two other parties that a good debate is all that is needed to vault her party into second or even first. It is about as close as it can get.
Posted by Éric at 9:45:00 AM