Garneau out, Trudeau definitely in

A bombshell landed in the Liberal leadership campaign today when Marc Garneau announced he was dropping out and throwing his support behind Justin Trudeau. But the outcome of the race was hardly in doubt before Garneau's withdrawal, and apparently the former astronaut agreed.

I haven't posted the endorsement rankings on the front page since they were published for the first time on January 11. Instead, I've just been updating the 2013 LPC endorsement rankings page each Friday with a little analysis. It simply hasn't been very interesting: only Trudeau has gotten anything more than a handful of endorsements, and his total share of the endorsement points has never dropped below two-thirds. But with Garneau's departure being the biggest news of the race so far, and that departure including the news of a survey of Liberal members and supporters, it seems like a good time to take a look at the numbers. 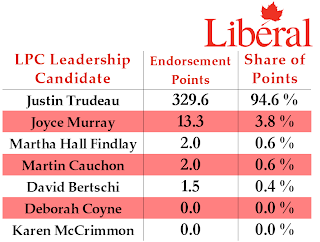 The only endorsement added to the rankings since last week's update is the tepid one from Marc Garneau. Trudeau gets all five of Garneau's points as he is a two-term MP, while he gets half of the points Garneau had gather from other endorsers (unless those endorsers head elsewhere in the coming weeks). 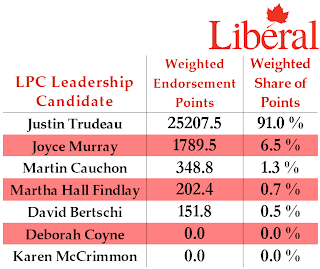 If we weigh those points by province, as the Liberal Party will be doing by giving each riding equal weighting in the vote, Trudeau still gets 91%, followed by Murray at 6.5%.

So, it looks like a Justin Trudeau landslide. The vote will almost certainly be closer than the rankings imply as each of the campaigns do have their own block of voters - and many of them will probably be more motivated to vote than many of Trudeau's supporters (you'd have to be pretty committed to support one of the other candidates in this race).

Does that make it a coronation? I find that description very odd. The race started with nine candidates, and there are still seven in the running. Marc Garneau, Joyce Murray, and Martha Hall Findlay are not wilting flowers, and have tried to push Trudeau. They had every intention of winning the race when they launched their bids. The fact of the matter is that none of them were able to gather as much support as Trudeau was. That does not make it a coronation - it would only be a coronation if all of the plausible candidates stepped aside, as occurred when Paul Martin and Michael Ignatieff were selected. Trudeau is going to win this easily simply because the majority of Liberal members and supporters see him as the best candidate. Just because it isn't close doesn't mean it is a coronation - it just means that the other contestants were not seen as a better option.

That is what Marc Garneau concluded when he saw the results of an internal party survey his campaign conducted. 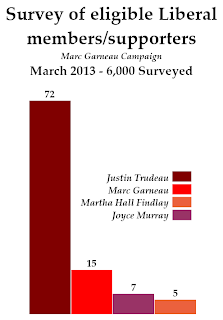 Marc Garneau made an effort to call this a survey and not a poll, as it does not appear to have been your standard scientific poll with a random sample. Instead, 50,000 Liberal supporters and members were invited to take part, and some 6,000 did. Who those 6,000 are is not known - they could have disproportionately come from one camp or another, or from one region of the country, or one demographic group, etc. Perhaps the Garneau campaign has more information, but we don't have anything else to go on but the numbers he reported.

Nevertheless, the results are pretty conclusive. With 72% in the survey, Trudeau is so far ahead that it puts him safely outside the potential errors and biases that the survey's methodology could inject into the sample. If Trudeau was closer to 50% then there might be some question - but this huge number is pretty definitive.

Where the other candidates stand is, on the other hand, hardly definitive. Garneau's poll gave him 15%, Joyce Murray 7%, and Martha Hall Findlay 5% (it appears no other candidates were included in the survey). Because of the potential problems of the survey, any of the three could actually be second. In fact, Murray's campaign was quick to come out and say that they were second, and that Garneau was much further behind. We'll have to see if any of them back this up with their own numbers.

Sound familiar? It should - during the NDP leadership campaign in 2012 the Dewar and Mulcair campaigns each released competing polls that placed Brian Topp in third or tied for fourth. The Topp campaign responded that their own numbers showed Topp to be much higher, and in the end they turned out to be right (Topp finished second on the first ballot). Peggy Nash, who was placed as the runner-up to Thomas Mulcair in both the Dewar and Mulcair polls, ended up placing a rather distant fourth.

Who is the Topp in this case? Is it Garneau, who the other campaigns claim is not second, or is it Murray or Hall Findlay, who were placed well behind in Garneau's poll? I suppose we'll never find out where Garneau would have finished, but we will find out who places second if Murray and Hall Findlay stay in the race.

They probably should. Joyce Murray's campaign is the only one apart from Trudeau's that could claim to be holding some momentum. She's gotten a lot of endorsements from outside the party, and a few from within the party itself, and could surprise in the same way that Nathan Cullen did as the co-operation candidate (though Cullen's surprising result also had to do with his strong performances in the debates). But because of her very controversial plan, she does have a bit of a cap in terms of her potential support. It is difficult to imagine a scenario in which she could win, but a very good showing could make the party consider her plan (though probably not).

Martha Hall Findlay can capitalize on Garneau's departure by being the primary non-Trudeau option (Martin Cauchon might challenge that assertion). The two might have split the non-Trudeau vote had they both remained in the race. Instead, Hall Findlay might be able to corral enough of Garneau's vote to finish second ahead of Murray. That would be important for her own political future.

It all might be a little academic, though. If Garneau's survey is even slightly accurate, Trudeau has a very good shot at winning on the first ballot. I would have said that, against seven other candidates including three with good bases of support, Trudeau would have had difficulty getting over the 50% mark on the first ballot. But now that the list has shrunk to six opponents, only two of whom are likely to break double digits, it seems likely that he can get enough to win on the first ballot.

But a landslide first ballot win is probably not in the cards. If Karen McCrimmon, Deborah Coyne, and David Bertschi all hold on until the vote, they can probably still pull together some 5% to 10% of the first choice ballots (Martin Singh and Niki Ashton together managed almost 12% on the NDP's first ballot). Cauchon might be good for another 5% to 10%. That leaves 80% to 90% of the ballots still available to the other three contestants, meaning a best case scenario requires Murray and Hall Findlay to combine for more than 30% support, or 40% in a worst case scenario, in order to prevent a first ballot victory for Trudeau. That might be difficult to achieve. It isn't impossible, but Murray and Hall Findlay did not manage that in Garneau's survey, even if we give them all of his support.

Could Trudeau have been more greatly tested in this leadership race? Certainly - and it might have done him some good. But even his critics have to admit that he has run a very competent and well-organized campaign that would have been difficult for any candidate to have beaten. Now it's Harper and Mulcair's turn to try.
Posted by Éric at 3:11:00 PM