Friday update: LPC leadership race and the OLP in Toronto

This week's Friday update looks at a new poll that shows the Ontario Liberals in fine form in the city of Toronto, and the state of the Liberal leadership race.

The deadline for registering for the Liberal leadership vote has come and gone, and the final tally is 126,000 Liberal members and supporters eligible to vote. That is quite a bit lower than the 294,000 members and supporters that were initially signed-up with the party. The Liberals shot themselves in the foot a little by trumpeting that number, since it was probably unrealistic that every person they signed up at a meet-and-greet or who gave minimal information on a website would take the next step and register.

But that 126,000 is not exactly a bad number - it is actually quite good. The New Democrats had 131,000 members eligible to vote in their leadership race, and the NDP is the Official Opposition with almost three times the number of seats the Liberals hold in the House of Commons. And, in the end, only 65,000 NDP members voted on the first ballot of their leadership race, a turnout of just under 50%.

Since registering for the Liberal leadership race was a two-step process, and since all of the voting will be done comfortably from home ahead of time, it is quite likely that the Liberals will have a higher "turnout" than what the NDP had, both in absolute and relative terms. If, after all this, the Liberals cannot get more than 65,000 people to vote (or 22% of the initial 294,000), then this process will have been a failure. 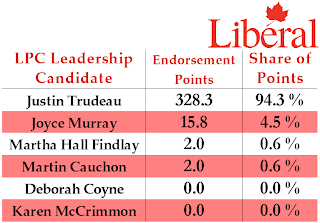 And, clearly, they think Justin Trudeau will win. No one with any reputation within the party has decided to stand behind either Martin Cauchon or Martha Hall Findlay, and Joyce Murray still has a very small list of endorsers compared to Trudeau. Her highest profile endorsers, actually, come from outside the party.

But her list did get a little longer, however, as first-term MP for Kingston and the Islands, Ted Hsu, threw his weight behind her. It gives Murray her first caucus endorsement. Hsu had endorsed Marc Garneau, but with Garneau out Hsu went over to Murray in a very pragmatic way. He more or less admitted Trudeau will win and that he will be happy to be part of Trudeau's team, but that he will be voting for Murray.

David Bertschi dropped out of the race, and with it went his two endorsers from his Orléans riding. Bertschi decided not to endorse anyone else. That shrinks the list down to six, four of whom are women (and two of the top three).

New this week was an IVR poll from Forum Research, showing that the OLP remains in good standing in Toronto. But the New Democrats are still in the running for more than a few seats.

The poll gave the OLP 42% support in the city, up four points from Forum's last poll of Feb. 26-Mar. 1 (that is still within the margin of error). The New Democrats had 30% support, virtually unchanged, while the Progressive Conservatives were down to 25%.

Compared to the 2011 provincial election, that is a gain of three points apiece for the NDP and Tories, and a drop of five points for the Liberals.

The Liberals were ahead in every region of the city except Scarborough, where the race is a three-way one: 34% for the PCs, 32% for the NDP, and 30% for the Liberals.

This is the sixth consecutive poll showing the Liberals leading in Toronto, followed by the NDP, and with the Tories in third. Since Kathleen Wynne became OLP leader, the party has averaged 41.5% in the city over five polls, compared to 28.6% for the NDP and 23.9% for the Tories. That puts this survey well within the norm.

In terms of seats, the Liberals would win 15 and the New Democrats would take seven, stealing York South-Weston and Scarborough-Rouge River from the OLP.

But Toronto remains the Liberal base. They need to hold off the New Democrats here as the Liberals are currently in a position where either they or the PCs could win the most seats in an election - a loss of more than a couple seats in Toronto to the New Democrats could move the Tories ahead in the overall seat count, due to their preponderance in the rural parts of the province. So while Toronto is unlikely to be a major battleground on the whole, some of its neighbourhoods will need to be fought over tooth and nail.
Posted by Éric at 9:29:00 AM