The Corporate Research Associates released their quarterly poll results for Newfoundland and Labrador and New Brunswick yesterday. With the poll from Prince Edward Island of last week, all show trouble for the Progressive Conservatives while the New Democrats have made gains.

I wrote about these NDP gains, and what they might mean for the federal party, for The Huffington Post Canada here. But let's take a closer look at the provincial numbers. 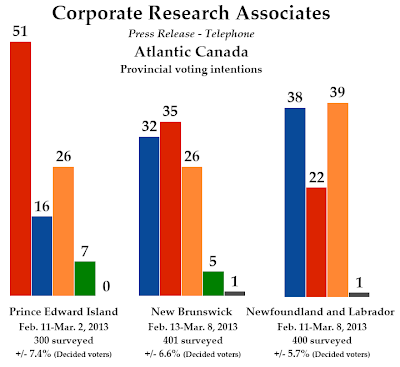 We'll start with New Brunswick, which will be holding its next election in 2014. Since CRA was last in the field in November, the Progressive Conservatives have fallen six points to 32%, putting them behind the Liberals, who were down three points to 35%.

This is the lowest the PCs have been since 2008, and the first time the Liberals have been given the lead in a poll since the 2010 provincial election.

The New Democrats were up seven points to 26%, the highest they've been on record. But this is only a small uptick, as the NDP had been between 20% and 23% for much of 2011 and the early part of last year, while they were at 24% as recently as August.

The Greens were up one point to 5%, while support for other parties was unchanged at 1%.

The margin of error is that of the entire sample for the "Best Premier" and government satisfaction questions, however, since undecideds are included. Brian Gallant, who was named Liberal leader last fall, had the best result on the premier question in New Brunswick: 26% said he was the preferred option. David Alward dropped eight points, outside the margin of error, to 21%, while Dominic Cardy increased to 15%.

Satisfaction with the government fell to 41%, while dissatisfaction was steady at 49% (15% completely dissatisfied).

Despite a deficit in support, the PCs make up for it due to their incumbency advantage. They would win 28 seats, the bare minimum for a majority government, thanks in large part to their support in the northwest and in and around Fredericton and Saint John. The Liberals would win 20 seats, primarily in the northeast and around Moncton, while the New Democrats take seven.

These are using the current boundaries, and not the 49-seat map that is currently under consideration.

Now to Newfoundland and Labrador. The poll from CRA is remarkable in that it is historic for the firm - it is the first time the New Democrats have been placed in the lead.

The PCs and NDP swapped eight points since November, with the New Democrats increasing to 39% and the PCs dropping to 38%. That is outside the margin of error, and represents the lowest Tory number in CRA's polling since undoubtedly before the Danny Williams era (they were at 36% in January's MQO poll, and 35% in June's Environics survey). At 39%, the NDP is at their highest level of support in any poll ever publicly released.

The Liberals dropped one point to 22%, and have been generally stable since the 2011 election. Support for independents was 1%, while the undecided portion was a relatively smaller 26%.

Lorraine Michael is the preferred person for premier, with 33%. Kathy Dunderdale slipped to 32%, while interim leader Dwight Ball was the choice of 17%. Satisfaction with the government tumbled by 13 points to only 45%, while dissatisfaction soared by 15 points to 52%.

Here again, the Tories manage to eke out a victory. But unlike in New Brunswick, they are limited to a minority government of 22 seats (19 of them on the island but outside of the St. John's region). The New Democrats take 17 seats, 11 of them in and around St. John's, while the Liberals win nine seats, all of them west of the Avalon peninsula.

Prince Edward Island remains a Liberal bastion, with the party leading with 51%. That is a gain of six points since November, putting them back to where they were in the 2011 election. The New Democrats scored their best result, gaining four points to move into second with 26%. With their leadership turmoil still on-going, the Progressive Conservatives fell 12 points to only 16%, their lowest result since at least the 2007 election, and almost certainly well before that.

Premier Robert Ghiz led on the best premier question, the only incumbent Atlantic Canadian premier to do so in CRA's four polls. He was at 37%, trailed by Mike Redmond of the NDP at 18%. Steven Myers, interim leader of the Tories, managed 7%, 12 points fewer than Olive Crane did before her resignation.

Satisfaction with the government increased to 50%, while dissatisfaction fell to 46% (those saying they were completely dissatisfied were down six points to only 16%).

In terms of seats, the Liberals would probably sweep the island with these numbers. It is difficult to know what would happen, as the New Democrats have never been this high and their support could be less uniform than the model suggests. The model puts the NDP within 10 points of the Liberals in only one riding (in Charlottetown), but if this poll was reflective of the result of the next election the New Democrats would probably be able to put their votes to better use and win a couple of seats. But their vote is less likely to be as efficient as that of the Tories (and that is not saying much) as we can probably expect the NDP to do best in Charlottetown, where the Liberals are already strong. However, if the NDP is indeed in second place, Redmond would be able to attract a few good candidates and, along with himself, win some ridings based on that alone.

With the New Democrats making new inroads in Newfoundland and Labrador, Prince Edward Island, and New Brunswick, the next elections in these provinces will be quite unpredictable. How will this party, that has never before been a factor in these provinces before, do when the rubber hits the road? Will pockets of support emerge in unexpected places? It makes for an interesting time in Atlantic Canadian politics.
Posted by Éric at 9:47:00 AM