Two polls have kicked off the Montreal municipal election, showing that former Liberal MP Denis Coderre is the odds-on favourite to win on November 3. But the race is far from over, as another candidate appears to be making a move.

This is also an opportunity to introduce ThreeHundredEight.com's coverage of the Montreal mayoral race, the first time I have forayed into the world of municipal politics. I plan to do the same when Toronto goes to the polls next year. The figures at the top of the page represent the current weighted averages of the polls, and you can click on the numbers for more details and tracking charts. I'll explain a little bit of the philosophy behind the averages and the tweaks that have been made to the model below. 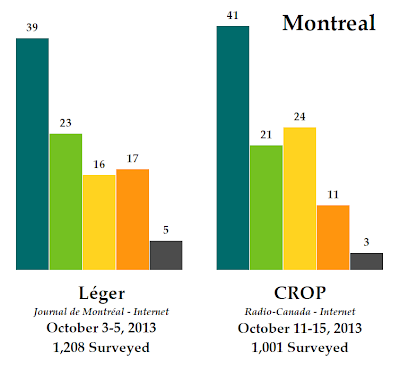 But first, the polls. Le Journal de Montréal/Léger poll came out just as the campaign began, confirming that Coderre held a wide lead. Running on the Équipe Denis Coderre ticket, the former Liberal MP had 39% support in the Léger poll, almost identical to the 41% he was given in the new Radio-Canada/CROP poll that was released last night. In both polls, his lead was of 16 or 17 points over his nearest rival.

But who is his nearest rival? The Léger poll pegged Richard Bergeron of Projet Montréal, who finished a strong third in the 2009 mayoral race, as the runner-up with 23% support, roughly equal to what Bergeron took in the last election. However, Bergeron placed third in the newer CROP poll with 21%, dropping behind Mélanie Joly.

Running with the Vrai changement pour Montréal party, Joly also has ties to the federal Liberals having worked with Justin Trudeau's leadership campaign. Unlike the other three main candidates, her party does not have any seats in the municipal legislature (Équipe Denis Coderre is mostly made up of former Union Montréal members, while Marcel Côté's Coalition Montréal is supported by Louise Harel's Vision Montréal party and former members of Union Montréal. Bergeron's Projet Montréal has survived the confusing shake-up at Montreal City Hall).

Joly had only 16% support in the Léger poll, putting her behind Côté. But CROP gave her 24% support, making her the main adversary to Coderre. If there has been real movement in the last week or two and this is not about methodological differences between Léger and CROP, it seems that Joly has benefited from the rough week Côté has had.

Côté's Coalition Montréal is actually the second largest in the municipal legislature, due to its support from Louise Harel's Vision Montréal (Harel finished a close second to Gérald Tremblay in 2009), ostensibly making it the major adversary of Coderre's group. But in the past few weeks the party was found to have been accepting double donations from people who were giving money to both Coalition Montréal and Vision Montréal, as well as making robo-call advertisements that did not identify the source of the calls. It was a rough period for Côté (who, long ago, had ties to Brian Mulroney's PCs), and it seems to have hurt him considerably. He went from 17% in the Léger poll to just 11% in the CROP survey.

Municipal politics being what it is, the notoriety of the mayoral candidates is an important measurement. With his long history in federal politics, it is no surprise that both Léger and CROP found Coderre to be the most well-known of the candidates (Léger found 76% had an opinion of him, while CROP found 70% saying they knew who he was). Bergeron came second in both polls, with 64% and 59% notoriety, respectively, while Côte came third with 42% and 40%.

Joly, who will be launched into the limelight with her good poll numbers, is the least well-known of the major candidates: only 36% told CROP they knew who she was. But this suggests she has a lot of room to grow, because those who know who she is seem to like her.

I assume that the question in the CROP poll asking whether respondents had a favourable opinion of the candidates was only posed to those who knew who the candidate was, otherwise the question and the results would make no sense (it is not clear in the Radio-Canada report). If that is the case, Joly had the best favourability rating among those who knew who she was: 70% to Coderre's 65%, Bergeron's 54%, and Côté's 49%.

If we take Léger's numbers and only look at the people who had an opinion of the candidates, we see broadly similar results: 58% good opinion for Coderre, 53% for Bergeron, and 68% for Joly. But we also see that Côté has gone from a 60% good opinion to just 49% in the CROP poll. Again, it is difficult to compare polls from different firms but it seems rather clear why Côté's numbers have declined.

The CROP poll strongly suggests that Joly is the candidate to watch as the potential challenger to Coderre. If we look at the voting intentions numbers, including the undecideds (numbering 21%, with another 6% not answering or saying they won't vote), and compare those to the notoriety figures, we see that Joly is converting more of that notoriety into support.

By this measure, 47% of people who know who Joly is say they will vote for her, compared to 44% for Coderre, 25% for Bergeron, and just 20% for Côté. Coderre has little room for growth since most Montrealers know who he is (particularly those are are likely to vote). On the other hand, Joly has plenty of room for growth: if she maintains this level of conversion - no sure thing, of course - she will surpass Coderre if her notoriety increases to 65% or so. That might be a lot to ask with little more than two weeks to go in the campaign, but she definitely has the chance to make a splash and finish second - and that will help the candidates running under her party's banner. Being the youngest of the candidates (34), that would set her up nicely for a mayoral victory in 2017.

I have never tracked a municipal campaign before. The polls tend to be few and far between and it is beyond my capabilities to know the ins and outs of municipal politics in every major city in Canada. But limiting it to Montreal, Toronto, and Vancouver - cities larger than half of the country's provinces - should avoid these problems. Coverage of these campaigns is good and there are often many polls. I suspect there will be a large number of polls when Toronto votes next fall.

But I am trying to keep it simple, and only aggregating the polls that come out during the campaign (similar to how I am currently tracking federal polls and provincial polls in Ontario and Quebec). I am not making any adjustments or giving any ranges. The approach is similar to RealClearPolitics, and just about aggregating the polls to give a, hopefully, clearer signal through all the noise. And I am not going to try projecting seats for Vancouver or Montreal, cities with a party system.

Two tweaks have been made to the aggregation model in the aftermath of the Nova Scotia election. The first is a simple one, preventing any one poll from taking up more than two-thirds of the projection's weight. It has only happened four times in the 12 elections I have covered that a single poll has carried more than 66.7% weight in the final projection, but in three of those cases the over-representation of a single poll made the projection worse (Saskatchewan 2011, Quebec 2012, and Nova Scotia 2013). In the fourth (Manitoba 2011), it made no difference. This cap has been inserted into the model to keep it an aggregation model - without this cap, the new CROP poll for Montreal would occupy 97% of the projection. At that point, I am just parroting back what CROP reported.

The other tweak is to weigh polls by their final date in the field instead of their median date. This is to prevent polls that are taken on a single day (such as Forum's) from being over-represented in the aggregation. So, for example, this CROP poll has been weighted for October 15, rather than October 13 (the median date of the October 11-15 survey), and the Léger poll for October 5 instead of October 4.

These are small tweaks that have a modest effect on the model, but serve to emphasize its qualities as an aggregation model. With the uncertainty that polls have had since the Alberta campaign, it seems better to try to gather as much data as possible in the aggregation rather than relying too heavily on individual polls.
Posted by Éric at 9:25:00 AM