The election in Nova Scotia will be held in only a few days' time and the polling has heated up. The rolling Chronicle Herald/Corporate Research Associates poll will conclude with a final report on the weekend, while the new Sun News Network/Abacus Data poll will run right up until the end of the campaign. With two surveys now in the field, we can hone in a little closer on what is going on.

Since the last major update last week, things have hardly budged. In the interim, however, the Liberals were flirting with an absolute landslide victory. Now, they just seem poised for a very comfortable majority.

The projection model currently estimates Liberal support to fall between 48.9% and 56%, with the polls pointing more directly at 50.9%. That would translate into 35 seats for Stephen McNeil's Liberals, or a likely range of between 32 and 39 seats. The threshold for a majority government is 26 seats, and only an absolute worst case scenario currently points to the possibility of a Liberal minority.

Darrel Dexter and the New Democrats are projected to be at 26.4%, with their likely range stretching to 29% of the vote. In terms of seats, they would likely win between 12 and 15 if an election were held today.

The Progressive Conservatives have lifted themselves back out of the teens and now stand at 20.8%, or between 19.2% and 22.1% of the vote. This should give them between three and five seats, though if things go badly for the NDP there is an outside chance that Jamie Baillie could head up the Official Opposition.

Polling in the campaign so far has been remarkably consistent, but there has been some movement primarily between the Liberals and Tories. The injection of the Abacus polling throws in a little uncertainty as well, as the firm has the Liberals lower and the PCs higher than CRA's estimates. 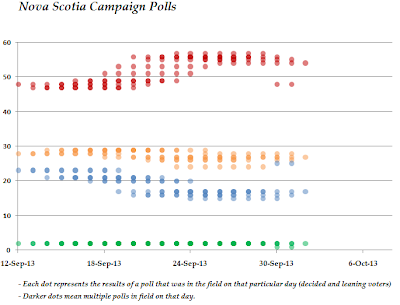 Let's first take a look at the CH/CRA poll which, though stretching back further than the SNN/Abacus survey, does contain some newer information. But to put it in proper context, let's compare the latest tracking numbers to the last couple weeks. 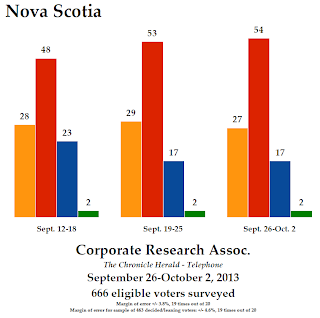 As you can see, the difference between CRA's latest numbers and the last completely independent sample is marginal. The only shifts, a gain of one point for the Liberals and a drop of two for the NDP, is well within the margin of error. But when also looking at the survey from early on in the campaign, a trend is a bit clearer. For the New Democrats, it is absolute stability: they have wobbled between 27% and 29% in CRA's three independent samples. The PCs have dropped significantly from 23% to 17% (a statistically significant decrease). The Liberals have been consistently increasing, from 48% to 53% and now 54%. The overall gain of six points during the campaign is within the margin of error, but only just. 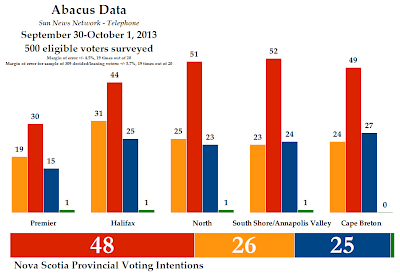 The new Abacus poll tells a similar story, but the details are slightly different.

The poll gives the Liberals 48% support compared to 26% for the NDP and 25% for the Progressive Conservatives. In other words, it agrees with CRA that the Liberals hold a virtually insurmountable lead. They also agree that the NDP is in the mid-to-high 20s.

But the big difference is, of course, the PCs at 25%. That is important for the party, as it is exactly where the Tories stood on election night in 2009. On the other hand, CRA is pointing to an all-time worst result. We will have to see if the final set of numbers from CRA shows an uptick that puts it more in line with Abacus's polling.

It also has to be recalled that CRA is incorporating data in the field running back to September 26 in their latest poll, while Abacus has data just from September 30. So comparing the surveys is like comparing one bag of apples to another bag of apples that includes a few rotten ones.

Abacus's extremely detailed report includes plenty of interesting information, including regional breakdowns. They show that the Liberals are leading throughout Nova Scotia, but that their advantage is less pronounced in Halifax.

The details in the poll make it clear just how much of an advantage the Liberals have. They lead in all age groups, including those older voters most likely to head out to the polls, are seen as the likely winners by half of the population, and lead the NDP on important issues like jobs and the economy and health care. McNeil beat out Dexter and Baillie by a margin of 30% to 19% and 15% on the Best Premier question - a margin similar, though somewhat tighter, than CRA's - and he has a much better favourability rating. Fully 53% of Nova Scotians polled said they had a positive opinion of him, compared to 37% for Baillie and 35% for Dexter. Perhaps more importantly, he also had the lowest negative rating: 22% to 35% for Baillie and 45% for Dexter. Those are murderous numbers.

Abacus is also calculating the voting intentions of who they consider likely voters. Among likely voters, Liberal support increases to 51% while the NDP stays at 26% and the PCs fall to 23%. Normally this is the kind of data I would prefer to use, but the samples are already very small and Abacus hasn't included regional breakdowns of likely support. So I will be sticking to the general-population numbers, but we should keep these calculations in mind. They point to the Liberals being able to out-perform their polls, while the PCs could under-shoot them.

Yes, yes, British Columbia and Alberta have taught us all we'll ever need to know about prematurely calling a race. But both of those elections showed much closer gaps than the 22 and 27 point gaps that these two polls are showing. So we should be safe. Famous last words.