Polls are starting to show a narrowing gap in Nova Scotia's provincial election, theoretically putting a Liberal minority in play. But Stephen McNeil still enjoys a very comfortable lead with only a few days to go before the vote.

It no longer seems likely that the New Democrats could finish third in either the popular vote or the seat totals, and the extremes of the seat projection does theoretically put the NDP in a position to win 25 seats to just 24 for the Liberals. This assumes a B.C. or Alberta degree of error in the polls, but to such an extent that the odds of it occurring are about 1 in 50 (if the election were held today). By comparison, at the end of the race in British Columbia I was giving the B.C. Liberals about a 1 in 5 chance of winning the most seats. But, if things go the other way, the Liberals could theoretically win 43 seats, with just six going to the New Democrats.

Overall, the model gives the Liberals between 32 and 37 seats, the NDP between 11 and 16, and the PCs either three or four. The precise projection is currently 36 seats for the Liberals, 11 for the NDP, and four for the Progressive Conservatives. 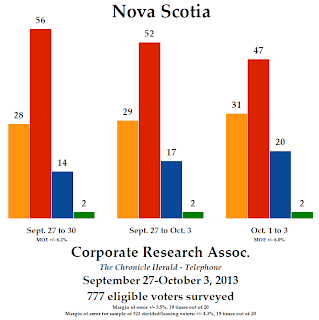 The Chronicle Herald/Corporate Research Associates poll released this morning is quite interesting, as it shows that some real movement is potentially taking place in these final days of the campaign. The overall sample, spanning a week from September 27 to October 3, shows stable numbers: 52% for the Liberals, 29% for the NDP, and just 17% for the PCs. But when looking at just the last three days of polling, the Liberals are reduced to 47%, the NDP is increased to 31%, and the PCs to 20%. That is much more in line with the polling being done by Abacus Data (as it should be since Abacus has only been polling in the last few days).

Of course, some caution needs to be exercised with the newer sample. Being a sample of just 270 decided and leaning voters, the margin of error is about six points. While that is large enough to exclude the possibility of the three parties being in any other order (it isn't as simple as just, for example, reducing the NDP by six points and increasing the PCs by six), it doesn't exclude the possibility of say, the Liberals being well over 50% and the NDP being well under 30%.

CRA's leadership numbers remain more or less unchanged, with McNeil at 36%, Darrell Dexter at 20%, and Jamie Baillie at 14% over the seven-day sample. 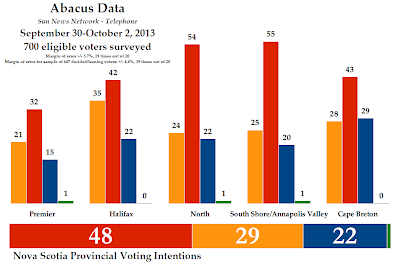 The Sun News Network/Abacus Data poll released last evening is only a partially new poll, as it simply adds another one day and 200 interviews to the poll that was released on Wednesday. With the newer data, the poll looks a lot like the latest, three-day sample from CRA. This erases the discrepancy the polls were showing before.

Abacus's likely voter model boosts the Liberals to 50%, against 28% for the NDP and 22% for the Tories.

Note the regional results, particularly in Halifax. With only a seven-point gap between the Liberals and NDP, a lot of seats should still be in play in the city.

It also worth noting that Abacus shows similarly strong leadership numbers for McNeil, most importantly his net +30 positive/negative rating. This is in sharp contrast to Baillie's +6 rating and Dexter's -7.

Also, the Liberals are beating the NDP on the economy by a margin of 31% to 18% and the party is doing a much better job of retaining their 2009 support. Fully 92% of Nova Scotians who said they voted Liberal in 2009 are planning to do so again, while only 49% of NDP voters from 2009 are sticking with Dexter.

The CH/CRA poll is the last of the campaign, so Abacus will take us the rest of the way. They will have new numbers out tonight from last night's polling, and will also be in the field on Saturday and Sunday. It is comforting that, just as CRA checks out and Abacus gets rolling, the numbers are converging. We will see where Abacus puts them through to the eve of the election.
Posted by Éric at 1:56:00 PM