A new poll by Ipsos-Reid for CTV was released over the weekend, showing that the three federal parties are locked in a close three-way race, and that the Liberals have lost the lead they were enjoying since April. Another poll, by Forum Research for The National Post and conducted at the same time, suggests that the Liberals are still leading but are looking soft. The overall numbers may disagree but the broad conclusions are the same. 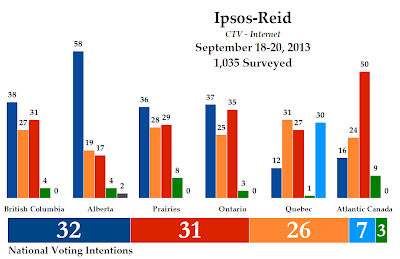 We will start with the slightly more recent Ipsos-Reid poll. We have not heard from the firm since the end of June, and their new survey shows no statistically significant shifts in support since then.

The Bloc Québécois was up one point to 7% while the Greens were unchanged at 3%. The number of undecideds totaled 12% of the entire sample, down three points from June.

On the face of it, then, Ipsos-Reid shows very little real difference between their June and September polls. But the firm has shown a clear trend against the Liberals: the party was at 36% in May, 33% in June, and now 31% in September. That drop of five points is outside the margin of error.

The poll found the Conservatives up by three points among men and the Liberals up by two points among women, while the Tories led among voters aged 35 or older (the NDP and Liberals split the younger cohort). The good news for the Liberals, though, is that when Ipsos only looks at those most likely to vote the party edges ahead with 32% to 31% for the Conservatives and 25% for the NDP.

At the regional level, no shifts in support since June were outside the theoretical margin of error. But the Liberals were down primarily in Quebec while the Conservatives were up in the three largest provinces.

The Liberals led only in Atlantic Canada, down slightly to 50%. The NDP was at 24% and the Conservatives were at 16% here.

In Quebec, the New Democrats were narrowly ahead with 31%, though that was down a bit from where they were in June. The Liberals were down more significantly to 27%, putting them behind the Bloc Québécois. They were up to 30% support, while the Conservatives were up to 12%. 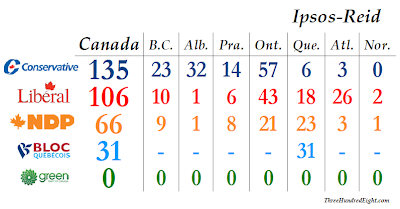 These numbers would deliver the Conservatives a plurality of seats, but they would still be in a position where the Liberals and NDP could combine for a majority government.

The Conservatives would likely win around 135 seats, with the Liberals taking 106, the NDP winning 66, and the Bloc winning 31. 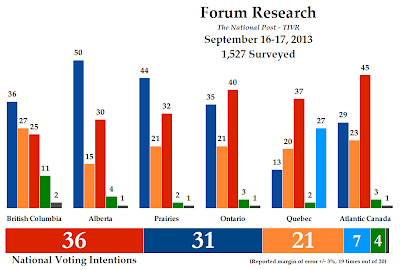 Now the Forum poll, which seems to be part of a series of polling that the firm gave to The National Post. However, I have been unable to find any reference to the federal numbers on the newspaper's site. The poll report is, however, on Forum's site.

Forum was last in the field at the end of August, and shows stable numbers since then: the Liberals were down two points to 36%, the Conservatives were up two points to 31%, and the NDP was down one point to 21% support.

The Bloc was up one point to 7% while the Greens were unchanged at 4%.

Forum does not show any consistent trend for any of the parties, as they seem to be wobbling back and forth. But if we compare this new Forum poll to the one they conducted in mid-June, at around the same time as Ipsos's last poll, we do see some similarities. For example, both polls show the Liberals down slightly  (two points) and the Conservatives up slightly (one point). This seems to be the general consensus of the polls so far - that the summer did not cause any dramatic change in support but that the numbers have marginally improved in the Tories' favour.

The difference is, of course, that Ipsos was showing a closer race in June than Forum did. The same goes for the difference between Abacus Data, for example, and Nanos Research. A marginal shift in favour of the Tories means the lead changes in the polls by Ipsos and Abacus. In the polls by Forum and Nanos, however, it still gives the Liberals a comfortable lead. Where does the truth lie? Thankfully, with two years to go before the next election it does not matter too much.

Clearly, there is a big divide over where the Liberals and NDP stand in Quebec. This is the major cause of the difference between the Ipsos and Forum polls. Both agree, however, that the Bloc Québécois is polling above its 2011 level of support.

The Liberals were also ahead in Atlantic Canada with 45% to 29% for the Tories and 23% for the NDP. 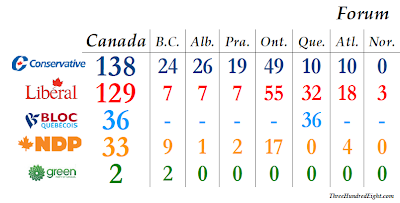 Especially when you see that it gives the Liberals seven seats in Alberta - as many as in B.C. or the Prairies! Overall, however, the votes do not work to the Liberals' advantage and they fall nine short of the Conservative total with 129 to 138. The Bloc takes 36 seats and the NDP just 33 seats, while the Greens win two.

These seat numbers are actually much worse for the Liberals than the ones with the Ipsos-Reid poll, as it gives them fewer options. The Liberals and NDP could combine for 172 seats in the Ipsos poll, while they could combine for just 162 in the Forum poll. That straddles the 169-seat mark for a majority. But note that the Quebec numbers are hard to estimate - as I've discussed before, depending on how the Liberal vote breaks down within the province the party could win an extra 10 seats or so (and the NDP would probably be able to salvage a few as well).

These two polls had some interesting numbers beyond the horserace. For example, on who is the best person to handle the economy (the major issue, according to Ipsos-Reid's polling), Stephen Harper was well ahead with 47% to 30% for Justin Trudeau and 18% for Thomas Mulcair in the Ipsos-Reid poll. In the Forum poll, the margin was similar: 34% for Harper, 23% for Trudeau, and 15% for Mulcair.

However, there were mixed results as well. On who would be best for jobs, Trudeau beat out Harper in the Ipsos poll with 33% to 29% for Harper, who was tied with Mulcair. Do Canadians care more about the economy or about jobs? The Ipsos-Reid poll suggests it is the economy, at 30% to 18%, but concerns about the economy may not be as pressing if you have a good job. On the other hand, if a bad economy is preventing you from finding a job, the economy may seem like the more important issue.

On the middle class, about whom we've heard too much lately, the Ipsos poll showed that Mulcair and the NDP were seen as understanding their pressures better at 38% to 30% for Trudeau and the Liberals, but on who would have the best policies for helping the middle class the margin decreased to 34% to 33% in favour of Mulcair. Trudeau was ahead in the Ipsos poll on handling healthcare (*cough* provincial jurisdiction *cough*), and was seen as more trustworthy in the Forum poll. On who would make the best Prime Minister, Forum gave the edge to Trudeau with 30% to 27% for Harper and 15% for Mulcair. Trudeau's approval rating, at 48%, was also higher than Mulcair's (36%) and Harper's (32%).

But before we finish with these two polls, let's take a look at how they were conducted. Ipsos-Reid did their poll online, which gives them some control over who participates in the survey. Forum Research did theirs via IVR, which can result in unusual samples.

In the chart below, I've compared the unweighted Ipsos-Reid sample to the reported Forum sample (which I assume to be unweighted). 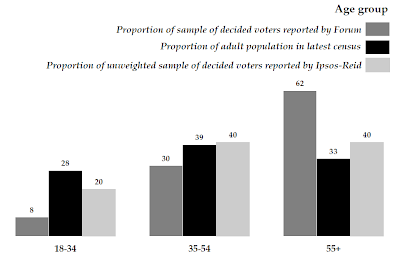 But this has almost become a distinctive feature of Forum Research's polling. They are often showing skewed samples like this. It seems odd to me that their methodology so consistently reaches older Canadians to such a large degree. Are we instead looking at how Forum weighs their polling? Is Forum reporting the results of their likely voter model, or are their samples always tilted in generally the same way because older Canadians are the only ones who bother to respond to IVR polling in large numbers? And, either way, what does that mean when we look at Forum's polling? If it is a model, then we are comparing apples to oranges with polls calibrated to represent the general population. If it is a methodological issue, then their polling is more prone to errors.

This is something that must always be considered when new polls emerge. The daily tracking polling we've seen from the Corporate Research Associates for The Chronicle Herald in Nova Scotia recently included a full breakdown with crosstabs and unweighted sample sizes (it was on the CH's website over the weekend). That breakdown showed that CRA's unweighted sample was quite representative of the population, and thus that the poll should be considered to be of good quality. This is the kind of transparency and disclosure that always needs to be included with polling so that readers, as well as the reporters writing about the polls, know what they are consuming.
Posted by Éric at 10:42:00 AM