Over the weekend, the Sun News Network/Abacus Data poll continued to roll, showing that the race remains stable province-wide. But going through the entrails of the poll we see that things are not so clear cut for Stephen McNeil's Liberals.

The extremes open up some more interesting possibilities, however. With an extreme range of between 21 and 41 seats, the Liberals could theoretically win a landslide majority or an enlarged Official Opposition. This is a change for the party, which had for some time been over the majority threshold in even their worst case scenario. The New Democrats could still conceivably win a minority government, or as few seats as to put them in a tie with the Tories.

The projection will be updated either late tonight or on Tuesday morning to incorporate the last set of numbers from Abacus and any other polls that emerge on this election eve. 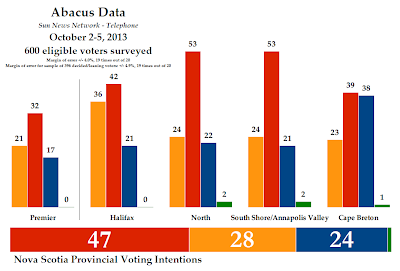 The latest poll from Abacus released yesterday shows very little change in voting intentions as the last days of the campaign slip by. Compared to their first independent sample, conducted between September 30 and October 1, no party has moved more than two points provincially. That is well within the margin of error.

The latest numbers have the Liberals at 47%, the NDP at 28%, and the PCs at 24%. That is a seemingly insurmountable lead. It gets wider among what Abacus estimates to be likely voters: 48% for the Liberals, 27% for the NDP, and 24% for the PCs.

But recent experience rewards caution, and there are a number of things in this poll that point to the potential, slim as it is, for a surprise tomorrow night.

Why the Liberals should win

The poll numbers are very strong for the Liberals. A 19-point lead is not something that is easily overcome. At this point of the Alberta campaign, the gap between Wildrose and the PCs was between seven and 10 points. In B.C., the gap between the NDP and the Liberals was between five and 14 points. With polling up to around three days before the vote, I was projecting a roughly five-point margin in Alberta and an eight-point gap in B.C. That is a far cry from 19 points.

The fundamentals also work in the Liberals' favour. They are ahead among likely voters and lead in all age groups, including the high-turnout oldest demographic. McNeil is out-polling Dexter on who would make the best premier by 12 points, or 18 points among those with an opinion. A majority of Nova Scotians, or 51%, have a positive opinion of the Liberal leader, with only 27% having a negative opinion. That positive score increases to 58% among likely voters. By contrast, Dexter has a positive rating of only 37% to 46% negative, increasing to a 39% to 48% split among likely voters. Only 28% of Nova Scotians think the NDP deserves re-election. And on who would be best able to handle the economy, the Liberals beat the NDP by 31% to 21%.

Put together, it makes it extremely unlikely that the Liberals would be able to blow a 19-point lead, either due to turnout, a late swing, or polling error.

But rather than look back at the polls with the benefit of hindsight, let's take a look now at what might prove problematic on election night. There is always the possibility of massive polling error and/or a late swing (even 22% of likely voters are undecided), but let's put that random occurrence aside and see what the Abacus poll itself tells us.

The Liberals could have difficulty winning enough seats to form a majority government. Abacus finds the race to be very close in Halifax and Cape Breton. The Liberal lead is only six points in the capital, with the margin of error for the regional sample at almost seven points. About half of Haligonians (49%) have a positive opinion of Dexter, just three points less than those who have a positive opinion of McNeil in the HRM. If the polls miss the mark even a little, or if turnout benefits the NDP in the city, the Liberals could end up losing a lot of close races.

And then there is Cape Breton. There are only eight ridings in this region, but if things go badly in Halifax than the Liberals will need to win in Cape Breton. The latest poll puts them only one point up on the Progressive Conservatives, who have an incumbency advantage in half of those eight ridings. If there is a late swing in both Halifax and Cape Breton, the Liberals might not be able to run the table enough in the rest of the mainland to form a government.

There are also some hints in Abacus's polling that the Liberals might not be as structurally strong as it appears on first glance. While the Liberals do lead when respondents were asked directly about the economy, the results were different among those who named jobs and the economy as their top electoral issue.

Among the 36% of respondents who chose that as their top issue, the NDP had a three-point lead over the Liberals on who was best able to handle it. On healthcare, a top issue for 29% of Nova Scotians, the Liberal lead was of only four points.

What this suggests is that while Nova Scotians generally see the Liberals as better economic managers, among those to whom this is most important the NDP has an edge.

But overall, the voting intentions and leadership numbers are so slanted towards the Liberals and Stephen McNeil that it seems that these small chinks in the armour can not be enough to overturn the expected result. We will have to see what the final polls of the campaign say before coming to a definitive conclusion, however.
Posted by Éric at 11:01:00 AM