ThreeHundredEight's final projection for the Nova Scotia provincial election heavily favours the Liberals to win a majority government, though the slimmest of minorities is also envisioned as a possibility. No scenario puts the NDP ahead of the Liberals in the seat count, though it is possible that the New Democrats could have a very bad night and find themselves in third place behind Baillie's Tories. But the expectation is for the Liberals and New Democrats to swap places in the assembly, and for their 2009 seat counts to be virtually reversed.

The Liberals are projected to win between 30 and 38 seats in tonight's vote, putting them well above the majority threshold of 26 seats. The model gives them 33 seats, which would represent their best electoral performance in the province since 1993. The are at an estimated 47.7% support in the polls, with the likely vote range stretching from between 45.8% and 52.5% of the vote.

Finishing second should be the New Democrats, with a projected likely range of between 12 and 15 seats. The model awards them 12 seats exactly, their worst result since 1999. They are expected to take between 26.1% and 28.7% of the vote.

Where the Progressive Conservatives will finish is an interesting question. The projection model has had them as low as 15.9% at the mid-point of the campaign, but they appear to have experienced an uptick in the last few days. They are projected to win between four and seven seats, with six being considered the most likely outcome. They should take between 21.4% and 24.7% of the vote, and averaged 23.3% in the polls. If this occurs, this will be the lowest number of seats they have won since the Second World War and their lowest share of the vote since Confederation.

How it could all go wrong

As I have discussed on several occasions, the fundamentals in the polling being conducted in Nova Scotia are extraordinarily strong for the Liberals. In addition to a lead wider than anything seen in the late stages of the campaigns in British Columbia and Alberta, McNeil has been out-polling Dexter by a significant degree at a personal level and the Liberals generally lead on the issues that matter.

In fact, some of the lessons of B.C. seem to have been learned. The polls that were done by the Corporate Research Associates and, especially, Abacus Data looked into the race in great detail and went beyond the simple voting intentions question. Because of that, we were able to see that the Liberal lead was not only wide but deep - something that neither the B.C. New Democrats nor the Alberta Wildrose could say before they were disappointed on election night.

Nevertheless, the model is prepared for a surprise tonight and observers of the election should be as well. The model assumes a degree of error as bad as anything we have seen in the last few elections, making for some wide ranges.

As you can see, the Liberals and New Democrats do not overlap either in votes or seats. This eliminates an NDP victory as a theoretical possibility, though it is always possible that the polls in Nova Scotia will do even worse than they did in B.C. and Alberta. If that is the case, woe be upon them.

The NDP and PCs do overlap, however, and it is possible that the Tories could finish second in both seats and votes. The final Sun News Network/Abacus Data poll suggested that could be the case. Vote efficiency is certainly in the NDP's favour, however, and they should be able to finish second.

Because I wasn't sure what kind of detail would be available during the campaign - and until Abacus started polling, that detail was rather pitiful - I did not break down the projection by region. But the model was and is making regional projections based on the CRA data that was available (estimating it when it wasn't) and incorporating the Abacus and Forum Research numbers when they emerged.

Halifax is the major prize of the campaign, with the Halifax Regional Municipality containing almost two out of every five seats in the province. The polls did suggest that this was one of the closest races in the province, but the Liberals appear to have moved ahead in the final days. They started the campaign at over 50% in the HRM and ended it closer to 45%, but for a time the gap between the Liberals and New Democrats in the capital was a mere two or three points.

The model estimates the Liberals will take between 44% and 50% of the vote in Halifax, netting them between 12 and 14 seats. The NDP should win between 30% and 33% of the vote and between four and seven seats, while the Progressive Conservatives should take between 20% and 23% and one or two seats.

The rest of the mainland region was dominated by the Liberals in most polls, with the party over 50% throughout the campaign and the two other parties splitting the rest between them. How the Liberal steamroller will perform here, however, remains to be seen. Will NDP and PC incumbents be able to hold?

Cape Breton is, to me, the biggest mystery of the election. The polls from CRA and Forum have both shown very weak numbers for the Tories with support in the mid-to-low teens, while Abacus has given them about 40% support. That makes a huge difference for the four PC incumbents on the island.

The weight of the evidence, primarily due to Forum's large sample on Cape Breton, points to the party finishing third with between 17% and 19% of the vote and zero seats. I have to admit that I believe the model will be wrong here and that some of the incumbents will survive. But with between 49% and 56% of the vote in Cape Breton, the model gives the Liberals seven of the island's eight seats. The NDP is expected to take between 27% and 30% of the vote and win one seat.

The polls have been very steady in Nova Scotia, showing hardly any movement since the campaign began. Campaigns always matter, but sometimes they serve to just confirm what people were already thinking. 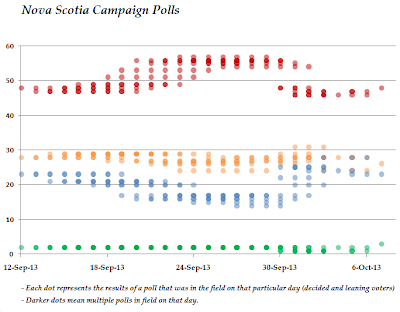 In the last week of the campaign, the Liberals were assessed to be at between 46% and 48% in almost every poll. That is a remarkable degree of consistency considering the generally smaller samples. Where the Tories and New Democrats stand, however, is a different matter.

CRA was suggesting that the PCs were polling very badly at under 20% until their final poll of the campaign was broken down. The last three days of their polling pointed to PC gains. Abacus showed the same thing, with the party polling at 22% to 25% in their first missives but 28% in their final one. Forum pegged the Tories at 23%, splitting the difference.

And that difference is what puts the NDP in a solid second or a precarious third. CRA put the New Democrats at 31% in their final poll, while Forum put them at 26% and Abacus at 24%. Unless the polls are wildly wrong, the winner of the polling sweepstakes will be the polling firm that put the Tories and NDP in the right spot. Generally, though, you have to favour the government - my gut tells me CRA will be closest to the mark.

How the leaders have fared

The last time anyone other than McNeil was chosen by Nova Scotians as the best person to be premier in a poll was in February 2012, and his numbers only got stronger during the campaign. CRA gave him between 34% and 38% on the best premier question in their final polls, up 11 to 20 points over Dexter. He barely polled above Baillie, something that was consistent in Abacus's numbers as well. In their polling, though, McNeil was lower (just above 30%) and the 'don't knows' were higher.

Abacus gave us a bit more information as it asked Nova Scotians to rate their opinions of the leaders. This was also good for McNeil, who managed 51% to 54% positive scores in all of Abacus's polling during the final part of the campaign. His negative rating was increasing, however, from 22% to 27% in the final days, but that still gave him a remarkable +25 score by the end. Dexter's positive score was stuck at around 37% with a negative rating around 47%, while Baillie's numbers improved slightly in the final days. He finished with a 41% positive to 33% negative score.

The projection model considers both Baillie's and Dexter's re-election chances to be good but by no means assured. Dexter is projected to take between 41% and 47% of the vote in Cole Harbour-Portland Valley, against 36% to 42% for his Liberal challenger. Baillie is slated to take between 44% and 50% in Cumberland South, against 41% to 47% for the Liberal candidate. Both calls are made with 59% confidence. I suspect, though, that they will probably be re-elected with larger margins than the model suggests (big swings can be difficult to assess accurately).

McNeil's re-election in Annapolis is made with 100% confidence, though the steam is shooting out of the model's seams on this one as it gives him between 81% and 93% of the vote. It was already a good riding for the party, and with the Liberals making such huge gains in the region their support is probably being inflated here.

A big night for Nova Scotians and pollsters

Nova Scotians generally give their governments a second kick at the can, the last time a government being booted out after one term being in the 19th century. But we saw in New Brunswick that re-election streaks can be broken. The election of an NDP government in Atlantic Canada was a historic first in 2009, so the defeat of a first term government in Nova Scotia can be a historic second in 2013.

That is, if the polls are right. Everything points to the polls being right. The Liberal lead is among every demographic, among likely voters, among undecided voters. The polls should not be wrong. If they are, the industry will be dealt a blow of tremendous proportions. Both CRA and Abacus were doing their polling the old-fashioned way: daily tracking with live-caller interviews. Both CRA and Abacus investigated how likely respondents were to vote, and Abacus probed their motivations to a great degree. Forum swooped in with a larger sample, more superficial poll, but simply confirmed the findings of their two colleagues.

Nova Scotia is a small province, but a lot of eyes will be on the results tonight. Canadian New Democrats hope that Dexter will pull off a surprise, and at least win a moral victory. Canadian Liberals hope that McNeil's election will mark the first salvo of a Liberal return to prominence. And Canadian pollsters hope that a strong call will be made and the industry's reputation will be partly rehabilitated. It should be an interesting night.
Posted by Éric at 9:34:00 AM