The final polls of the Nova Scotia campaign were released today by Abacus Data and Forum Research, the two showing the Liberals enjoying a lead of between 18 and 22 points. There seems to be little doubt that the Liberals are on track for victory, but who will finish second in the vote count is up for debate. 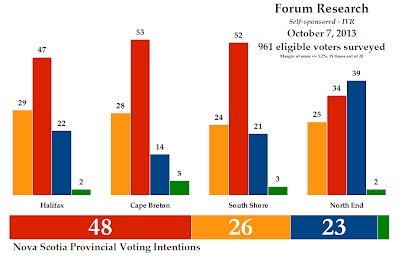 We have not heard from Forum during this campaign, but the firm often puts out last minute polls. And unlike their election eve polls in Alberta and Quebec, this one aligns with what the other polling firms are showing and does not suggest we are in for a surprise.

Forum gives the Liberals 48% support, compared to 26% for the New Democrats, 23% for the Progressive Conservatives, and 3% for the Greens. It is virtually identical to most of the numbers we have seen from CRA and Abacus Data during this campaign.

The PC's strength in the north end, however, is different from what Abacus has found while the Tories' weakness in Cape Breton is similar to CRA's findings and in contrast to Abacus's. But with the PCs having four incumbents in Cape Breton, it seems strange that the party would be doing so badly there. And those 5% of Nova Scotians hoping to vote Green on Cape Breton will be disappointed - the party does not have a single candidate there!

But overall, Forum suggests the Liberals should win handily. They lead among all age groups, income brackets, and education levels, along with among both men and women. And the firm has been doing some daily tracking since October 4, according to its report, showing remarkable consistency for all parties.

The full details of the Forum poll, which called 28,868 households in order to build its sample (a response rate of 3.3%), can be found on the polling firm's website. The PDF to the report is here. 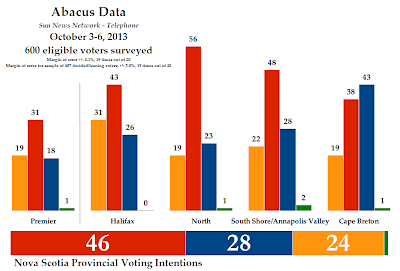 The final Sun News Network/Abacus Data poll of the campaign shows a change in order of the parties, but no statistically significant shifts. And Forum and Abacus are within each other's margin of error.

Abacus has the Liberals still way ahead with 46% of the vote, compared to 28% for the Progressive Conservatives and 24% for the New Democrats.

Tracking polling by Abacus and the Corporate Research Associates throughout the campaign have had the Tories in third, so to have them in second place is quite a change of fortunes. But the margin of error being what it is, the Tories's edge over the NDP is not statistically significant.

Among likely voters, the Liberals led with 46% to 27% for the PCs and 26% for the NDP, suggesting that the advantage the Tories had in the overall vote over the New Democrats may diminish when people actually vote.

The Tories continue to poll well in Cape Breton, while a step backwards in Halifax by the New Democrats is the main reason for the order change.

The polling firm contacted 7,326 households to build its sample, a response rate of 8.2%. Sadly, this is typical of polling today.

Some of the findings of the poll that I found concerning earlier today have partly gone away. While the Liberals are now at a bigger disadvantage in Cape Breton, their 12-point lead in Halifax should deliver them enough seats to form a majority government. On who would make the best premier, McNeil is seven points up on Dexter in the capital. And for those who pegged the economy as the most important issue, the Liberals now have a three-point lead over the NDP (though they also now have a three-point deficit on the issue of healthcare). When everyone was asked about the economy, though, the Liberals increased their lead over the NDP - they are now ahead by 32% to 18%.

In addition, the Liberals' fundamentals remain strong: a lead among all demographics and very strong personal numbers for McNeil, particularly when compared to Dexter.

Now that the polls are in it is up to those Nova Scotians who did not yet cast their ballots to do so. This is an important election for them, of course, but it is also an important election for pollsters. They need a good call. There is enough agreement between the polls from the Corporate Research Associates, Abacus Data, and Forum Research that they will all sink or swim together. But there are also enough differences that some of them will come out of tomorrow night's vote looking better than the others.
Posted by Éric at 10:03:00 PM