We are rather deep into February to take a look back into January, but after Nanos Research released its latest numbers - stretching from January 26 to 31 - only a few days ago, the wait was warranted. In all, four public federal polls surveying 5,666 Canadians were conducted during the month of January, showing relative stability for the New Democrats and Liberals and an uptick for the Conservatives. 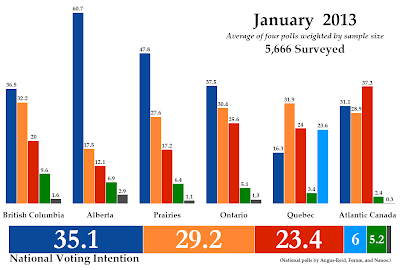 The Conservatives averaged 35.1% support during the month of January, an increase of 2.3 points over December's average. This is the highest level of support the Tories have managed since August 2012.

The Bloc Québécois was down 0.5 points to 6%, while the Greens took the biggest tumble, falling 2.4 points to 5.2%. This has more to do with the polling firms that were in the field than any sort of knock against the Greens, though.

If we look at the last time that Angus-Reid (twice), Forum, and Nanos were all in the field within 30 days of each other, we must go back to May-June 2012.

Since then, which was near the height of Thomas Mulcair's "honeymoon" as NDP leader, the Tories picked up 1.5 points, the NDP dropped 5.3 points, the Liberals picked up 2.4 points, and the Greens were down 1.1 points.

The New Democrats were ahead in Quebec with 31.9%, their third consecutive month at around 32% after a seven-month period of almost unchecked decline in the province. The Liberals placed second with 24%, a gain of 1.7 points, while the Bloc Québécois was at 23.6%, a drop of 1.9 points since December. The Conservatives have been pretty steady in Quebec since March 2012, and averaged 16.3% (+1.7) in January. The Greens were down 1.1 points to 3.4%.

The yo-yoing of the Conservatives that has been on-going since July continued in the Prairies, with the party jumping 8.6 points to 47.8%. That is, however, their best result since October 2011. The New Democrats were down 5.8 points to 27.6%, the Liberals were down 1.5 points to 17.2%, and the Greens were down 0.9 points to 6.4% in Saskatchewan and Manitoba.

The Liberals held the lead in Atlantic Canada for the third consecutive month with 37.3%, up 0.3 points since December. The Conservatives had 31.1% support, up 3.4, their best since March 2012. The New Democrats placed third for the first time since the last federal election with 28.9%, down 0.4 points. The Greens were also down 3.1 points to 2.4%.

In the 338-seat House, and using the still-in-flux proposed boundaries, the Conservatives would have won 161 seats in a January election, a gain of 16 seats over December's results. The NDP fell four seats to 99, while the Liberals were down seven seats to 68. The Bloc Québécois shed five seats and would have won nine, while the Greens held onto their one.

As January saw little major change, it is hard to pick winners or losers for the month. The Conservatives probably had the best polling month, increasing their national lead, moving into first in British Columbia, and making sizable gains elsewhere in the Prairies and Atlantic Canada. They are still well below where they need to be in British Columbia and Ontario to win another majority, however.

The New Democrats had a good month as their decreasing support was finally turned around, and making gains in Ontario is absolutely essential for the party. But the NDP also needs to be doing better in British Columbia, the Prairies, and Quebec, and the loss of support in Atlantic Canada (at least since the heydays of 2012) is significant.

For the Liberals, any month in which they are still a factor is a good month while they are en attendant of Justin Trudeau. The party was stable everywhere, with most changes in support being of less than two points. Gains in British Columbia and Quebec is good news - another slip in Ontario is not.
Posted by Éric at 9:54:00 AM