I've updated the pollster leanings chart with CROP. They only conduct polls in Quebec, and it will come as no surprise that they are the least favourable pollster when determining Bloc support. CROP tends to poll the Bloc 3.7 points lower than the average. They are also unfavourable to the Greens (1.8 points lower), but favour the NDP (3.4 points higher), the Conservatives (1.3 points higher), and the Liberals (1.2 points higher).

This is the last pollster to be added to the chart. From now on, I will be updating the chart with more recent calculations as time permits.

This chart tracks how each pollster tends to lean when calculating support levels for the various parties, as compared to the average polling results from other pollsters each month. This does not necessarily equate to a deliberate bias, but instead is more reflective of the polling methods used. 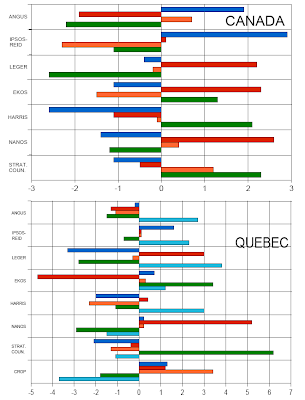