Proportional Representation in the 2008 Election

I thought it would be an interesting exercise to look at what the 2008 election would have been like if Canada had a proportional representation system. I chose a regional PR system, with each province voting MPs according to PR and giving them each the amount of seats they have presently. What do we get? 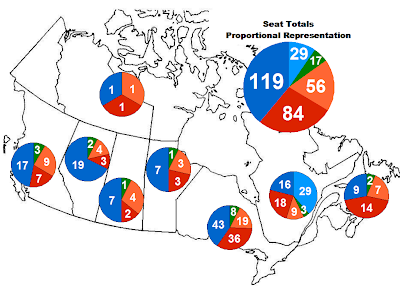 This would be a far more representative system of government. Rather than the Tories winning 72 of 95 seats in Western and Northern Canada, they would win 51. The Liberals would have 16 MPs from the West and North (rather than eight), the NDP would have 21 (instead of 15), and the Greens would have seven.

While this sort of system would all but guarantee minority governments, it would be far more representative and the parties would learn to work together. With this Parliament, a Liberal-NDP-Green coalition government could even be possible. Coalitions like that have worked in Europe and have worked well. Or, the Conservatives could have governed with the Liberals or on a case-by-case basis with any of the parties.

This sort of system would also encourage fringe parties, though there would probably be some mechanism requiring, say, 5% nationally before any MPs anywhere could be elected.

In any case, it is just an interesting little exercise. Based on the current projection, using this system would result in the following Parliament:

At first it would cause some instability to have such weak minorities, but eventually I believe it would be more healthy for our democracy.
Posted by Éric at 8:56:00 AM